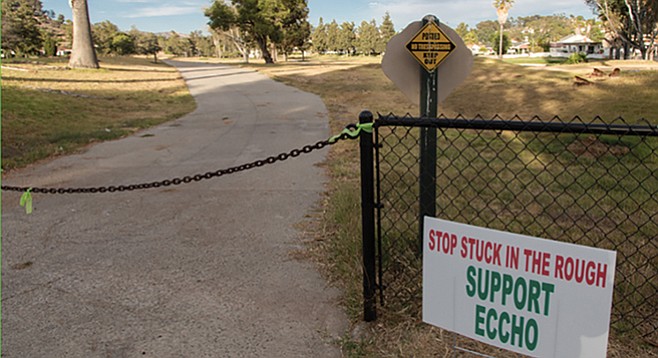 Stuck in the rough

They won their election battle with Michael Schlesinger, but residents around the former Escondido Country Club golf course where the controversial Beverly Hills developer wants to build condos now have to reckon with the state’s political watchdog. Schlesinger, who once dumped a smelly load of manure over the greens in his bitter battle against the neighbors, spent more than $1 million on last year’s campaign, compared to the homeowners’ five figures, but it turns out the residents didn’t follow the law.

“On or about June 2, 2014, the Homeowners Organization started soliciting and receiving contributions for the purpose of opposing Proposition H and, in response, formed the ballot measure committee Keep It Green Escondido to manage their campaign in opposition to Prop. H.,” says a recent stipulation filed by the Fair Political Practices Commission. The group raised a total of $16,000 to beat back Schlesinger’s measure, then failed to report it until early this year.

“The seriousness of the violation is aggravated by the fact that donor information for contributions totaling approximately $16,000 was not disclosed to the public until after the pertinent election.” But since the group was “an unsophisticated filer,” it got off with a $2500 penalty.

I fully support SITR & Michael Schlesinger over the ECCHO attempted land-grab. However, so long as we're supposed to be in a drought, there should be no building permits issued. If a single permit is issued in the County, then I completely reject the idea that I should cut my water use by one drop.

Is the open space designated or dedicated?