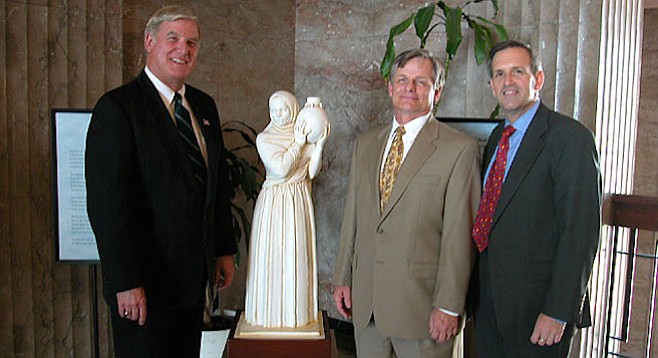 Roosevelt portrait and copier placed at risk by negligent accounting

San Diego county supervisors, accustomed to lurking in the shadows of local government as their fellow public servants at city hall endure chronic controversy, have lately been getting their own share of negative public attention.

As Democrat Dave Roberts battles scandal over his treatment of staffers, Republican colleague Ron Roberts is leading a stumbling but costly effort by the city and county to build a new stadium for the Chargers.

Now comes word via a June 12 audit that a trove of artwork was placed in jeopardy due to sloppy accounting by the clerk of the board's office, charged with keeping track of virtually everything having to do with the supervisors, from legislation to the county's historic art collection.

According to the document, the clerk "is the custodian of 16 historical art pieces consisting of 13 paintings and 3 murals on the County Administration Center’s walls."

But when auditors investigated, they discovered that the clerk's office “does not have clear accountability of the artwork assigned to them. Specifically, [auditors] found that the 13 paintings are incorrectly included in the materials and supplies inventory list with no assigned value."

Making matters worse, "While [clerk's office] management provided separate inventory records for 15 of the 16 pieces of artwork, the appraised value was outdated or missing." 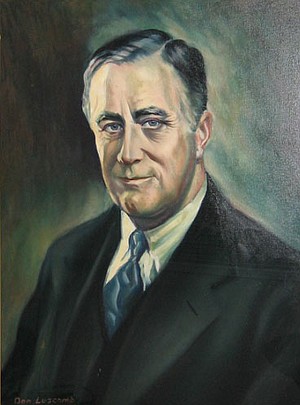 The report by county chief of audits Juan Perez recounts, "Further audit work identified a current appraised value of $431,500 for 15 of the 16 historical art pieces. However, [the clerk] did not have records to document the appraised value of the Portrait of President Roosevelt painting."

Because "staff indicated that they were uncertain how to properly account and track historical artwork and how to report the appraised value of these assets," the audit goes on to say, "inadequate accountability of historical artwork could result in assets being lost or stolen without detection."

The county's website says the Roosevelt portrait was done by Donald Armand Luscomb in 1937 "for a contest sponsored by the historic Spreckels Theatre in downtown San Diego.”

Luscomb's children donated the painting to the County Administration Center art collection in 2006. The artist, who died in 2004 at 91, was born in Golden Hill and raised in Burlingame and South Park, the biography says.

"Proficient in the use of various media such as pen and ink, pencil, oils, acrylics and copper plate etching, Mr.Luscomb generally preferred to express himself through humorous cartoons, comical illustrations and limericks."

More prosaically, the audit also found there was "insufficient oversight of leased assets" by the clerk, including a copy machine, the lease of which "started in May 2006 and ended in May 2014, but has not been returned or replaced by the vendor."

Notes the audit, "Insufficient oversight of assets under [the clerk's] custody increases the risk of assets being lost or misappropriated without being detected."

The so-called transition audit that discovered the trouble was triggered by the arrival of new a new clerk of the board, David Hall, who replaced Thomas Pastuszka in January, according to the document.

In a June 9 letter to auditor Perez, Hall said the problems called out by the audit should be cleared up by next month.

"All historical artwork has been added to the minor equipment inventory at the most recently appraised value," wrote Hall.

One thing you can be assured of that there will be no accountability for the sloppy work of the Clerks office. No one will suffer any consequences for their incompetence.

Matt, do you remember all those wonderful plein art paintings that used to adorn the walls of City Hall and the offices of department heads, their top lackeys and the elected and appointed officials?

Where is it now? Where are the records?