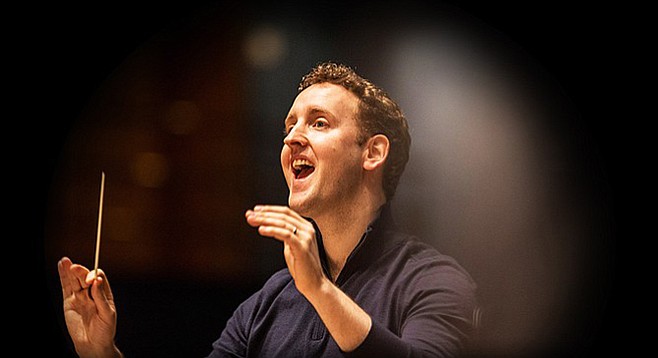 There is a unique event coming up on Sunday, June 14th, at 3 p.m. — a free concert at Balboa Park's Plaza de Panama.

What is the event? I’ll let Maestro Michael Francis tell us about it as we continue our interview.

Michael Francis: I think you absolutely make a very good point. I think what we are doing is interesting. One of the events I am most proud of this year is the San Diego Makes Music concert on the fourteenth of June. That is a concert where we have the festival orchestra, adult amateurs, and the youth orchestra playing along side them. We've also invited the community to bring their instruments to join in. We’re doing pieces by Mozart written for multiple levels [of musical ability].

Now that’s a really exciting event. What we’re looking to do is — not to patronize an audience or dumb down classical music but instead appreciate that people are intelligent. Nowadays if you look at how people consume sports on television it’s not enough to just watch the game. Now we want player cam, tactical advice. We want to know what’s going on behind. We want to see inside the dressing room. We are all more curious. We don’t just passively receive, we engage. We’re offering that as a festival. I think you’ll see, as we move forward into the upcoming years, that we are doing that even more. We’ve also opened our general rehearsals. We want people to enjoy the great art of a concert onstage and we make no apology for it. We do not dumb it down in any way because the process of listening together is so healing for a community. It’s the one art form that when you go and sit there you receive together, you engage together.

SDR: It’s magical when you break it down for people. The humanity of players and the audience is all being shared with the humanity of the composer across space in time. Politics don’t matter. Social status, gender, and sexuality don’t matter. None of it matters because everyone is experiencing it as it happens.

MF: I think if I put a piece of music on now and we have people from 120 different countries from different social classes listening and I said to write down your emotions at this point, I believe almost everyone would have the same one. Music really is the universal language. It brings us together. What I really love outside of the community of the musicians and the staff is the great community of the patrons, donors, and friends. There is a tremendous sense of fun and social cohesion. Our events bring people together and that is just wonderful. I think of an event that we had at the aircraft hangar — there are all these events called Amadeus Events. These are social events for people and they develop great friendships and that is because music has brought them together, their love of music. Then they bring their friends and the music is a really healing force in the community. We have 35 people from the Rescue Mission coming to our concerts, each one. And beforehand the musicians and people go into there and work with them and play music with them and bring them here. Not many organizations are doing that.