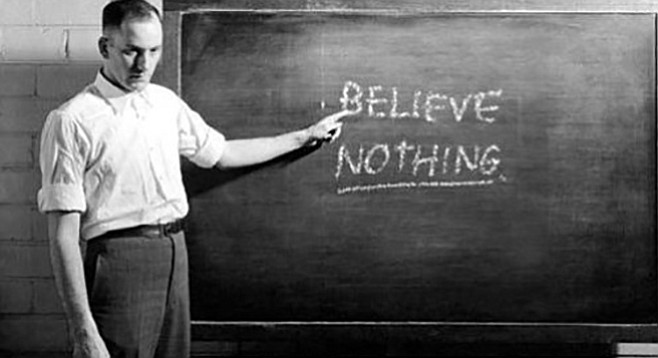 How to start with Mozart and end up with nihilism

Mozart’s Haffner Symphony is a fairly famous piece of music, but who the hell was Haffner? Haffer got not just the symphony but also a 55-minute-long serenade. That’s about 90 minutes of music by Mozart written for... who?

So how did Haffner pull that off? According to the Notes from the Maestro in the Mainly Mozart program, Mozart loved the Haffner family.

I’m still wondering who the Haffners were. They were part of the ruling class in Salzburg. The father of the family had been mayor and had helped the Mozarts with some of their childhood tours.

Why am I so interested in this? Without Mozart, the Haffners are lost in time as a family of wholesalers and shipping agents. Who gives an expletive about the Haffners? Mozart did, and that made their family name famous internationally.

The Haffners had money and some influence, but what is that really? I’m wondering when our values are going to change.

What I’m getting at here is that the Haffners accidentally made their name last forever. They had power and money but that doesn’t make much of a difference after you’re dead. Did I just invoke the “you can’t take it with you” clause? Yes, I did, because it’s true.

Let’s play a little game. Name the richest people before 1982, the year Forbes started making a list of rich people. Off the top of my head I’ve got Rothschild, Vanderbilt, Carnegie, Rockefeller, Henry Ford, Howard Hughes, and probably a number of kings, pharaohs, and Roman Emperors.

This isn’t about vilifying the rich. It’s not even about trying to focus on what matters most. The more I think about it this isn’t about anything. Billions of people live everyday without listening to Mozart, let alone his Haffner projects.

Is this the start of my nihilism? Great. Just great.