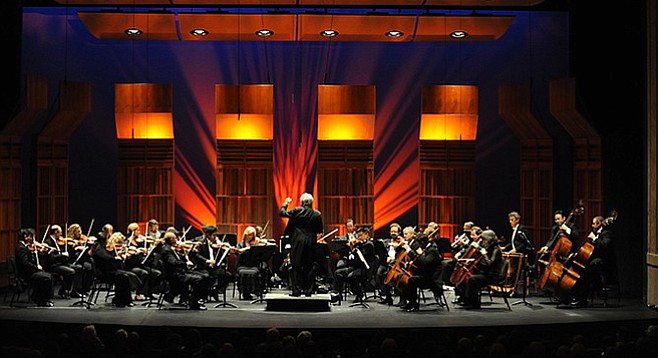 You need an epic to describe an epic

A Mainly Mozart Festival Orchestra experience only Homer can describe

“No more words — he dashed toward the city, heart racing for some great exploit, rushing on like a champion stallion drawing a chariot full tilt, sweeping across the plain in easy, tearing strides — so Achilles hurtled on, driving legs and knees. And old King Priam was first to see him coming, surging over the plain, blazing like a star that rears at harvest, flaming up in its brilliance, —far outshining the countless stars in the night sky, that star they call Orion’s Dog — brightest of all but a fatal sign emblazoned on the heavens, it brings such killing fever down on wretched men.”

Except for the killing fever, the opening concert of the Mainly Mozart Festival Orchestra was exactly like that. When a concert is epic, it behooves a writer to humbly turn to Homer for a fitting description.

This orchestra “far outshines the countless stars in the night sky.” Conductor Michael Francis’ heart must have been “racing for some great exploit.” Pianist Jon Kimura Parker’s hands swept across the keyboard in “easy, tearing strides... blazing like a star that rears at harvest.”

The fever might not have been for killing but there was a fever — and no, it didn’t need more cowbell — in this concert. The final movement of Beethoven’s Symphony No. 7 made everyone’s temperature rise as wave after wave of sound washed over the audience. Just when we thought there couldn’t possibly be more, Beethoven and the orchestra ratcheted it up another notch. The effect was explosive — if you know what I mean.

The Beethoven was the conclusion of the concert. The middle child of this concert was Mozart’s Piano Concerto No. 21, sometimes given the cognomen Elvira Madigan. Whatever. I think a more appropriate cognomen would be The Jon Kimura Parker. Why not? Well, let’s not get carried away here.

Kimura, ever playful, gave an encore of Scott Joplin’s Solace confirming that if there is a pianist with whom you want to be “four beers deep,” he’s the one.

The Piano Concerto No. 21 can be a trap. There is a temptation to let the middle movement turn into cookie salad. The concert could quite easily have become overripe and fallen off the tree with a splat.

I think that is what impressed me most about Michael Francis. All three pieces, including the opening Haffner Symphony by Mozart, were paced to perfection. Great conductors find a tempo for the entire piece. They don’t conduct from movement to movement. There is a fundamental beat upon which the entire work rests.

(This is one reason to not clap between movements. I'm just saying.)

The next concert is Wednesday, June 10, at 7:30 p.m. The venue is the Balboa Theater downtown at Fourth and E.