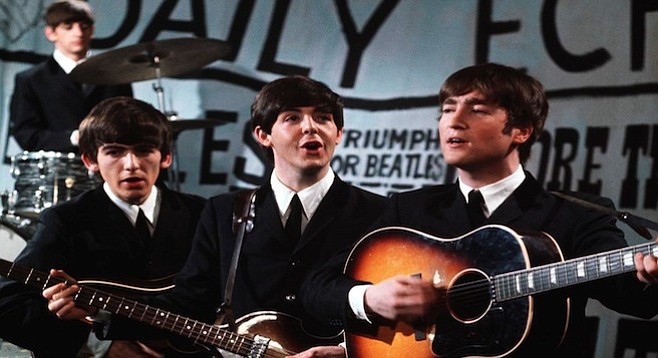 John Lennon’s 1962 Gibson J160e guitar, once thought lost, has been discovered in San Diego at Marc Intravaia’s Sanctuary Art and Music Studio in Sorrento Valley and is about to go up for one of the most publicized auctions in Beatles history. However, “Once the story broke on Reuters, there was quite a few awful comments about my friend [John McCaw, the guitar’s owner] from people not knowing the whole story,” Intravaia tells the Reader. “He bought it in 1969 from a friend and never knew what he had until he brought it to me last August.” 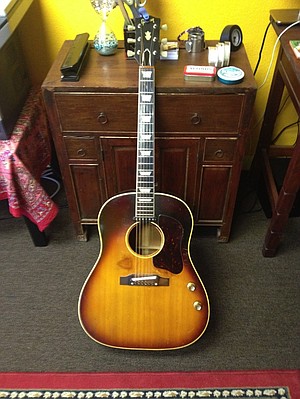 McCaw bought the mildly beat-up Gibson acoustic from a friend for $175, in a transaction at Blue Guitar shop, then located in Old Town. After spotting a magazine article in 2014 with a photo of George Harrison holding a similar guitar, McCaw noted Harrison’s guitar was only four serial numbers away from his Gibson, and concluded they were probably made on the same day in 1962. Further research revealed that John and George bought identical Gibsons on September 9, 1962 at a Liverpool music store called Rushworth’s.

“He had read that at some point between September 1962 and December 1963, they swapped instruments for reasons unknown,” says Intravaia, “and that John’s guitar went missing after a series of December 1963 Christmas shows in London at the Astoria Cinema in Finsbury Park.” Intravaia and McCaw found video of Lennon playing the guitar and noted several remarkable similarities to McCaw’s guitar, too numerous and detailed to list here but including specific scratches, wear marks, and – most telling – wood grain patterns. Local video archive licensors Reelin’ in the Years provided a high-def tape with freeze-frame close-ups of Lennon’s guitar, and pairing it with footage of McCaw’s (as seen in a new YouTube video) led to Intravaia contacting the official Beatles gear expert Andy Babiuk.

A montage of images of John Lennon with his 1962 Gibson.

“He made it very clear that this might be a forgery and that he needed better pictures of the wood grain, because, in his words, ‘the wood grain is the DNA of the guitar.’” With Babiuk holding all the original records and receipts for Lennon and Harrison’s Rushworth’s guitar purchases, Intravaia was delighted when “I received a call from Andy confirming that it was John Lennon’s guitar.”

Julien’s Auction House in Beverly Hills is auctioning the Gibson over the first weekend of November. The company’s owner, Darren Julien, calls it “one of biggest finds in music history,” stating in the press release that its sale may exceed the $965,000 earned in 2013 for an electric guitar owned by Bob Dylan.

Interesting theories floating around online about how the Beatles guitar may have landed in San Diego. People are already tracking the tour histories of the next few bands who played the same overseas venue as the Beatles, just after the guitar went missing (accidentally left backstage by Mal Evans), which seems an excellent way to find a band that MAY have gone to San Diego shortly after that. Tho the guitar may have instead stayed overseas for years or decades, it does seem possible that whoever found it KNEW it was "hot," even if they didn't know whose guitar it was, and may have sold it off on one of their next tour stops...in San Diego....

It was Lennon's guitar, it was stolen when a mistake left it behind. It belongs to Julian, PERIOD! Think about it, what would you teach your children to do? Hmmm I thought so!

Is this Music shop still open that Sold it ? After alot of research, I may know how the Guitar got to San Diego in 60s. The support act with the Beatles in 63, were the guitar went missing. Played in San Diego June 64, It was their first date in a US. Tour there are alot of stories there is a video of George Saying it was his guitar and he gave it away.Also many that say Lennon only ever played this Guitar once the whole history is a pack of lies. To get a better price. It does appear this way as the auction claims he wrote songs and recorded with it. But all pictures show him playing the other Guitar and the bill of sale in Lennons name is not this Guitar.

For sure it may have belonged to Beatles. But in Law its Georges Guitar. I would advise someone to never buy it as if someone comes forward to say they sold it in Sand Diego, did not have permission Yoko will be in the courts faster than you can imagine.Its a big risk. If the police looked at this the prime suspect would be that support act and road crew. Not many travelled like today. The guitar did not walk from London To San Diego. This will all end in tears. First thing anyone should have check how did it get there and by who ? All these people that could have done this are still alive in UK.

The guitar sold at auction this weekend for 2.41 million dollars.