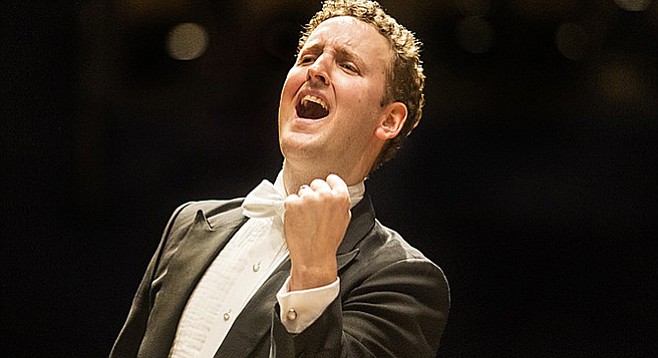 Conductor Michael Francis talks Mozart, "the most fascinating of all musical lives"

The new music director of Mainly Mozart, Michael Francis, hits us with a firehose-stream of knowledge and understanding prior to the opening of the Mainly Mozart Festival Orchestra concerts.

The interview is so extensive that we are going to visit it as the festival progresses. Here is his opening statement regarding Mozart.

San Diego Reader: Why should people care about Mozart and his festival?

Michael Francis: Two questions there. I’ll start with the one about Mozart. Mozart is probably the most fascinating of all musical lives. He’s the most documented. He wrote the most letters. His father wrote the most letters. We know the most about him. He is also the rare combination of completely native talent alongside a formidable childhood education and exposure. Therefore he brings up the whole issue of prodigy and what does that mean. He is the gold standard for prodigies — and then what we often see is that prodigies burn out. They don’t often don’t mature into adult genius. Mozart did and his transition into that is fascinating. He had to fight against the patriarch — his father — and discover his own determination, discipline, and autonomy for himself, his craft, and his art. Then on top of that he was the first true entrepreneur in music. He started his own subscription series. So he never just waited upon others. He had a healthy disdain for authority and he was happy to push himself forward.

In terms of his musical output, he has such a quintessential understanding of the human spirit, the human soul — human suffering. He’s fundamentally an opera composer in all that he does. In his symphonies and piano concertos you get a sense of him playing. In his operas you get a sense of him going deep into what it means to be a human being. In Don Giovanni you see him dealing with the issues with his father. You sense him, very openly, plowing through and not letting life knock him down. He had many trials and tribulations as, of course, we all do. Throughout, he turned those trials and tribulations into beautiful music. That’s a wonderful example for all of us — to turn what is dark into something that is positive for others and help them both as a mirror and a lamp to help us find our way through. Great art does that. All of us have a powerful connection with music. Our iPods are filled with pieces that mean an awful lot to us. Mozart is the supreme example at a time when almost all of music had united into a single style for about 30 or 40 years before it spread out into the Romantic Period. Everybody got what he was doing. They understood his genius. He had such an innate sense of style and of the language and fashion of the time. He was able to push the boundaries while always staying unique to the human spirit.

To answer your question about why this festival, I would say that this festival is unique. It has one of the most outstanding orchestras you could ever wish to hear, composite of all the finest players in America. That in itself could easily be “too many chefs spoil the broth.” That’s not the case here. There’s a great sense of respect. A great sense of collegiality — of working together. There’s a great history here and a pride and a desire. Musicians all around America, while I’m conducting, say, “Oh, I’d love to come and play in San Diego.” They're not coming here to earn a fortune. It’s nothing like that. They’re coming here to make music. It’s the end of a very busy orchestral season for many of them but they still want to come and play music in a smaller orchestra. There must be something special here.

The festival also allows us a chance to look at the life of Mozart in a very multifarious way — in an exciting way. We have the Mozart and the Mind symposium. We’re looking at the prodigy from a scientific point of view--trying to make sense of what’s going on there. We’ve also got the spotlight series where can look specifically at his chamber music. We also have the Mainly Mozart Youth Orchestra and we’re working with the Rescue Mission. I would say this festival is one of the more unique ones in the whole of America for offering an example of how to look at a composer and then stretch it out to explore the social dynamics.