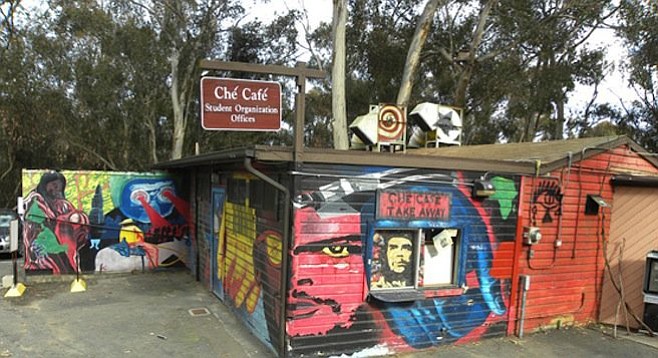 Ché has a pulse

When UCSD administration had an eviction notice posted on Ché Café in March, images of supporters getting hauled off by sheriff’s deputies drove four TV crews to the 35-year-old food co-op and music venue to see what would happen at zero hour.

But no cops showed at 6 a.m. on March 24. Sixty-five days later...still no cops, and UCSD is not talking. A sheriff’s spokesman says his department has 180 days to carry out the eviction.

“They aren’t dumb,” says Mar Moreno, who says he’s been part of the Ché collective for 30 years. “They know what they’re doing. They’re gambling the students and the collective will run out of steam...”

Meanwhile, devoted volunteers man the Ché 24/7. And shows have returned, sending out a mixed message about the plight of the Ché. Cursed Graves and American Rifle played May 26 and Debt Ritual and Recluse on May 28. Little Heroine and Long Knives are booked June 26.

“I was happy to play there again. It was good to just get in and play for kids. It’s been pretty stressful, this whole fight. Every time there’s a show and they don’t show up with the goon troops, it’s a celebration.”

Moreno says there were no fireworks March 24 because “they don’t want police officers dragging people out of the Ché on the news.” He guesses that the administration is waiting until the quarter ends in two weeks, to get as little publicity as possible.

Fellow Ché collective member Raquel Calderon says the money taken in from the door charges at the recent shows will likely be used for legal costs. She says the collective holds out hope that the administration will offer to discuss the plight of the Ché, but there has been nothing but silence.

Meanwhile, Moreno organized a boycott asking all artists to boycott any other UCSD venues. “I took it on my own to contact people who were involved in the Ché as far back as 30 years ago.” Although he admits his boycott is kind of like “preaching to the choir,” he says his online boycott has drawn the support of Jello Biafra, Rage Against the Machine, and locals such as John Reis, Rob Crow, Justin Pearson, Peter Sprague, and Jaime Valle.

“It feels good even if it’s a token show of solidarity. People all over the world will be bummed if the Ché goes away.”