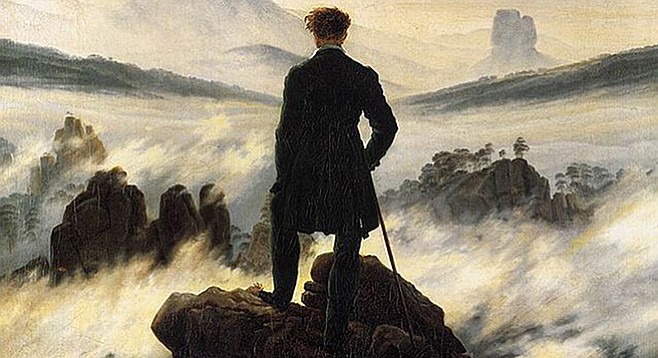 Songs of Travel by Vaughan Williams is the esoteric pick of the week. Now, if at any time in your life you’ve been a baritone undergraduate student, this is not an "esoteric" selection — this was the second half of your senior recital. But if you're not required to attend music major recitals, then Songs of Travel is probably something you’ve never heard and probably never will.

The songs are settings of poems by Robert Louis Stevenson that depict a first-person's account of wayfaring. There was a 19th Century tradition of poems and song cycles about the wayfarer, established by pieces such as Schubert’s Die schöne Müllerin and Winterreise.

There are 20th Century examples as well. The character of Gandalf is very much the wanderer — maybe based a little bit on Wotan as the wanderer in The Ring Cycle. Hermann Hesse’s Narcissus and Goldmund explores the life of the wanderer. Steinbeck’s Travels with Charley, Free Air by Sinclair Lewis, and Jack Kerouac’s On the Road are all wanderer-based books.

There is a certain romance about the idea of the wanderer. Who was the wanderer? He shows up often enough in art, poetry, and music that we can assume it was a “thing.” More than likely it was an economic issue; I’m thinking of the hobos in the United States during the Great Depression.

While Vaughan Williams’ song cycle isn’t that well known to the general population, I would say it is the best introduction to the artform for English speakers. The songs take us through several moods.

The first song is about the confident vagabond stepping out onto the path, living the life he loves. In the third song he is talking about building a castle for his beloved. We all experience these poles in our relationships and life. Sometimes we stride forward declaring that we are best when we are on our own. At other times, we long for home and security.

Speaking of Gandalf, Vaughan Williams is very much a compositional wizard. The shifting moods of his music in Songs of Travel borders on the magical. There is a mystical quality to his writing that appeals to the wizarding community.