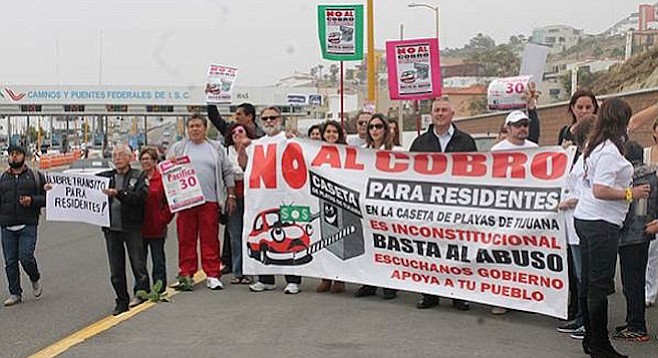 For whom the tolls rankle

About 30 residents of Playas de Tijuana, holding placards and passing out pamphlets to motorists, gathered at around 10 a.m. on Saturday, May 30, at the entrance of the toll road to Ensenada. They assembled to protest being forced to pay for use of the highway to travel short distances.

About 12,000 people live in 16 neighborhoods along the toll road, which is their only access to work, schools, shopping, and other necessary trips, according to press accounts. They want the government to exempt them from paying the toll since there are no alternative, free roads on which to travel.

Octavio De La Torre, one of the leaders of the group (named “No al Cobro para residentes de Playas de Tijuana"), told the daily Sol de Tijuana that residents are not asking for the elimination of the toll, only that they be exempt from paying the usage fee along the 18.5-kilometer stretch of the roadway (about 11.5 miles) where the neighborhoods are located.

The newspaper reported that area residents have been paying the toll for 48 years.

“The purpose of the toll booth was to pay for the highway,” Mónica Jiménez Serrano, another leader of the anti-toll group, told the daily Frontera. “It has been paid for and paid for again. What we are asking for is just. There are those who say we live in a privileged zone and that privilege is that we have to pay to leave and return to our homes.”

According to El Sol, the group has collected around 20,000 signatures on petitions asking the government to provide relief to the residents, but nothing has happened.

The anti-toll group has spoken with a city delegate in Playas, with the mayor's office, and with a representative of the federal agency responsible for collecting the tolls and maintaining the highway, all to no avail, De La Torre told the newspaper.

Four months ago, representatives of all of Mexico's political parties agreed to a statement calling on federal highway authorities to stop charging the toll to residents of neighborhoods in the affected area, but so far there has been no action, De La Torre said.

“Per week, the charge at this toll booth represents at least 400 pesos [about $27] to be able to leave for your work, for school, or to the store, and this is unfair,” he said.

Other options the group is willing to consider, according to its leaders, are subsidies to residents from the state or municipal government or the construction of a free road.

I'm sorry but who cares? We have enough issues in San Diego without worrying about a toll road in TJ.