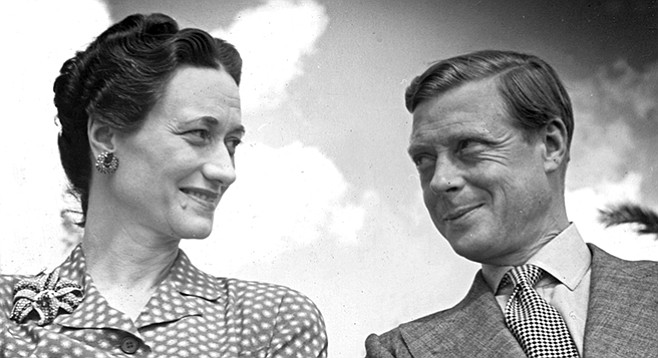 It was 10:00 p.m., Wednesday, April 7, 1920. Britain's prince of Wales stood at the entrance to the Crown Room in the Hotel del Coronado. He had come for a dinner-dance in his honor. 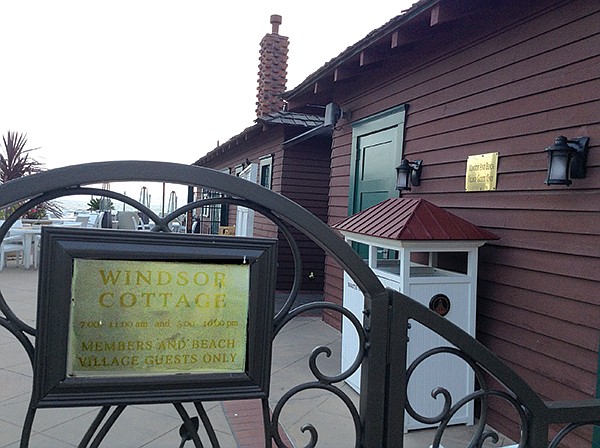 He and Lord Mountbatten had just stepped off their battlecruiser, HMS Renown, which arrived via the Panama Canal on the prince’s goodwill trip to Australia and New Zealand. Edward was the age’s glamour boy, the first royal star of the new mass-media era. The world loved him. 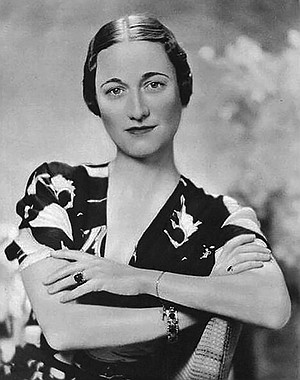 Wallis Spencer Simpson in 1936. Andrew Morton’s profile is titled 17 Carnations. The “17” refers to the number of flowers von Ribbentrop allegedly presented to Wallis. Word was, this represented the number of times she slept with him.

And so, legend goes, did a lady who lived one block away from the hotel, Wallis Warfield Spencer, the Coronado gal who almost be came queen of England.

You might say that the Hotel Del has been dining off Edward and Wallis’s romance ever since. There are plenty of reminders: the Windsor Cottage on the Del’s beachfront. (It’s actually Wallis’s Craftsman bungalow transported a few hundred yards from her address on Flora Avenue.); the Prince of Wales Grill, the hotel’s premier restaurant; the Crown Room, where the prince dined and danced that night (yes, “Crown” might also relate to the Spanish name for the island); and the “romance of the century” section you hear from guides of the hotel’s regular history tours. 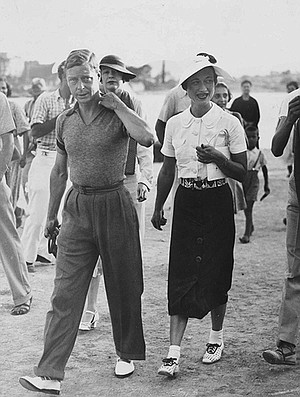 Edward VIII and Wallis Simpson in the Mediterranean, 1936. Both books accuse Edward of being a Nazi sympathizer who cozied up to Hitler, possibly handing intelligence to Germany about Britain’s intentions toward Belgium in 1940.

But, times have changed. The Prince of Wales restaurant has become 1500 Ocean. The historic photos featuring Edward and Wallis downstairs have disappeared, all except one of the prince saluting for a photographer in his Royal Navy captain’s uniform. The black-and-white image hangs in a much-diminished history gallery downstairs. Wallis, the Coronadan who almost brought down the British monarchy, can only be found in books sold in the hotel’s souvenir store. 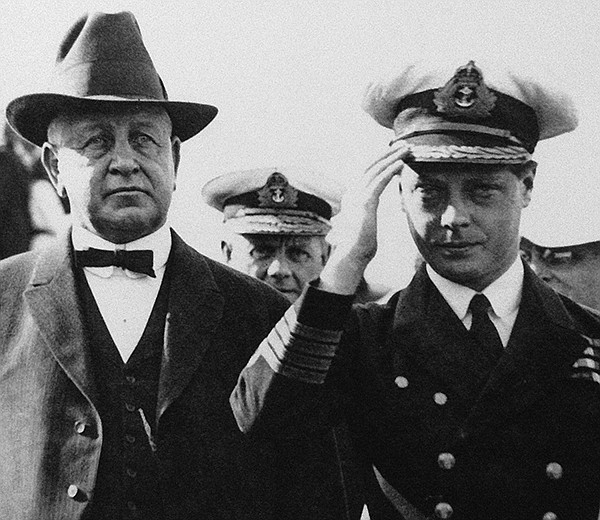 What’s happening? Why would the Del downplay its royal connection that used to be a jewel in its crown? Could it be because of two new books just out, which have seriously dented the couple’s reputation?

The books are Princes at War, by Deborah Cadbury, and 17 Carnations: The Royals, the Nazis and the Biggest Cover-Up in History, by Andrew Morton (the biographer of Princess Diana). They both accuse Edward of being a Nazi sympathizer who cozied up to Hitler, even visiting him in Berlin in 1937, and then possibly handing actual intelligence to Germany about Britain’s intentions toward Belgium in 1940, when Britain was already at war.

I go up to the concierge desk. “We don’t talk about it much, simply because nobody knows about them,” he says. “Look, half the time I have to explain who Marilyn Monroe was, let alone Edward and Mrs. Simpson. We have had a great number of celebrities staying here, from Woodrow Wilson to FDR to JFK to LBJ to Ronald Reagan to both Bushes and Bill Clinton, not to mention movie stars. Only the occasional British visitor may ask.”

“If it hadn’t been for new royals like Princess Di and Kate and William, no one would know who on Earth Edward and Mrs. Simpson were,” confirms Nancy Cobb, who with Gerry MacCartee has been leading history walking tours through the Del for 35 years. “But I do think the hotel has pulled back on promoting them, as the Nazi thing has become better known. The hotel has its own docents who must stick to a hotel-approved script, so you won’t hear any of the controversy there. But, to their credit, the hotel lets us independent walking-tour leaders tell it like it is. We tell people about it, and how Coronado in 1920 had the Naval Air Station at North Island and the Del, and maybe 30,000 jackrabbits. That was it. Not the ideal spot for a socially ambitious woman like Wallis. She came here because she was married to Win Spencer, who had been made the first commander of [North Island.] No way she would have liked living on the dirt pile that Coronado was back then.”

Most histories say she didn’t, but could Wallis have met Prince Edward at the Del?

“We don’t know,” says Cobb, “but she was a kind of powerhouse with the other North Island officers’ wives. She would have been on any invite lists.”

It seems Spencer himself told a reporter for the San Diego Sun newspaper in 1936 that his wife was with him that evening in 1920, and that “we all went down the receiving line” to meet the Prince. And what’s more, “as I recall she slipped away for a few minutes and may have been received [privately] by the Prince.”

Did she tell the prince how she wanted a more exciting life? The problem is, nobody depends on this Spencer quote. He was a confirmed alcoholic and may have had an interest in stoking the royal connection.

What do Nancy Cobb and Gerry MacCartee tell their tour groups about the couple’s Nazi associations? “If they ask, I tell them what I know, like that he was charming, cute, but that he may have let Nazi sympathies influence who he made friends with. And some say the two of them actually passed on troop movement information to the Germans.”

One special friend of the ex–royal couple was Joachim von Ribbentrop, the German ambassador to Britain before the war. Andrew Morton’s profile is titled 17 Carnations. The “17” refers to the number of flowers von Ribbentrop allegedly presented to Wallis. Word was, this represented the number of times she slept with him.

If Wallis and the prince did first meet here, at the Del, it would be a decade before they did again, next time in London. Five years after that, Edward was so obsessed with the woman that he gave up the monarchy.

“Just think,” says Nancy Cobb, “Britain might have lost its monarchy and the war because one person stuck in Coronado didn’t like jackrabbits.”

After decades of over-hyping itself and its history, the hotel may have finally grown up. Or maybe it is just another overpriced beachfront California resort hotel now. The string of guests that stayed there over the years wasn't exactly a who's who of the best that society had to offer. Oh, and then there was owner and fake war veteran M. Larry Lawrence.

A closer reading of this piece reveals a pair of foolish comments attributed to Nancy Cobb. The first is calling Coronado a "dirt pile" in 1920. Surely it wasn't as prettied up and wildly overpriced then as it is now, but it had a nice little town then, and one that was appreciated by (most of) its residents. Her second faux pas is the claim that "Britain might have lost its monarchy" due to Wallis. It didn't lose its monarchy at all; he quit and his unprepared brother assumed the throne.

Keep in mind that the British royal house has just about no authority to govern. It's all for show, and as long as the Brits like the show, is harmless. Oh, it is great theater, too.