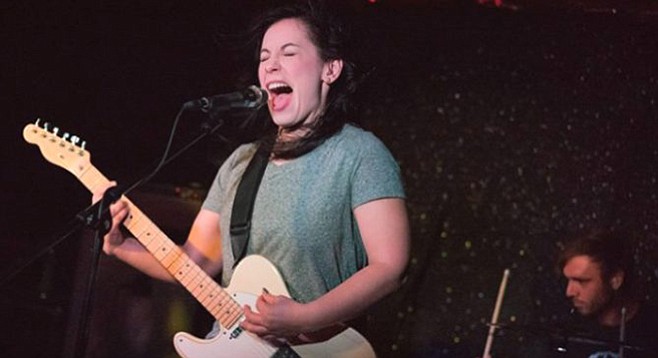 Vanja James finds her voice in a muscle-rock trio

Bassist Trips Jurado and drummer Ryan Badabing mesh like a rocking monster truck, cut through by Vanja James’s power chords and piercing vocals. James’s second San Diego show as Little Dove wouldn’t be laughed out of a metal showcase. A four-person-deep cluster of screaming headbangers — many at Bar Pink for Gloomsday — suggests that Little Dove could be the overnight sensation James has been striving for since, as she tells me, “Someone pissed me off by saying, ‘You don’t rock enough.’ In response, I wrote ‘Misery.’ Tommy Andrews then helped me hone tunes with heavy riffs like I was hearing in my head. Pursuing music as Little Dove allowed me to create a different version of myself — my voice opened up when I started singing this ballsier way. When I started in 2005, San Diego generally only made room for females as singer/songwriters. I tried to pursue rock here before moving to Los Angeles in 2013, but in San Diego, I was this ‘acoustic artist.’ By 2012 I had been rocking out with Hot Cannons for a year. And the San Diego Music Awards nominated me for Best Acoustic.

“Still, I felt like the lone chick in San Diego, wanting to jam with a bunch of dudes. L.A. was great in that people were incredibly supportive of Little Dove. I teamed up with Dylan Cooper and we did our first show a couple weeks later, at the Viper Room. Dayle Gloria gave us a residency and put Little Dove’s name on the back of Viper T-shirts. I love L.A. — it’s just expensive, and everybody’s really busy.

“I spent months trying to find the perfect apartment before ending up in a nice place in Los Feliz. But there was also this really uncomfortable scenario with a furniture mover who flaked on me, so I didn’t pay him. Then he started sending idle threats about coming to my house to ‘get his money.’ The threats were so bad that for days I was walking around with a hammer and mace in my pocket anytime I left my place....

“I met Ryan Badabing through Nas Konja, who said Ryan was the best drummer he’d ever played with. After Ryan saw me at the Casbah in March, I contacted him, along with Trips Jurado. To my surprise, Trips’s response was, ‘I’ve been waiting for you to ask me that.’”

Little Dove will be at Mother’s Saloon in Ocean Beach this Saturday, July 25.