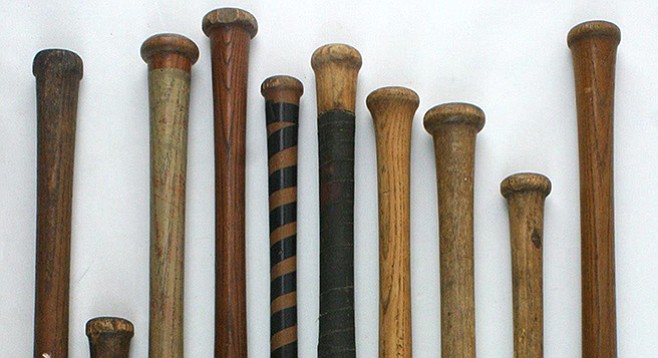 Hurlers and the behind in Lockling Square

Bay City’s taking on The Resolutes today at Lockling Square. As the players warm up, some shout encouragement, but most stand stiff. They toss and catch the ball with affected grace, as if posing for a tintype.

Lockling Square is San Diego’s first athletic field. Alonzo Horton deeded the land – bounded by Sixth, Seventh, C, and D (Broadway) – to L.L. Lockling, a civil engineer, for surveying New San Diego. The field is fairly flat. Except for stray animals, the only hazards are drilled wells and the occasional wooden outhouse, a half-moon cut through the door for ventilation. But these are outside the new fence they put up.

It’s the summer of 1880, and the rules are changing. The two professional leagues in the east, the National and the American, make yearly revisions to maintain a balance between the offense and defense. Telegraphs announce the new ones, though attitudes toward them on the west coast take time, sometimes months and years, to accept the change.

That San Diego has no railroad slows things down as well.

Recently the pitcher’s mound has been moved from 45 to 50 feet. But it isn’t a “mound,” just a flat rectangle of dirt, on a path leading to home plate.

Pitchers, called “hurlers,” don’t throw curveballs. Most try to “burn ‘em in.” To throw a batter off they soft-lob the occasional change-up.

The hurler throws underhand. He can take a running start, as in cricket. But the catcher – called “the Behind” – doesn’t signal the pitch. The batter does. He indicates a spot high, middle, or low, and the hurler must aim there.

If the hurler doesn’t, the sole umpire gives him a warning. If he still doesn’t, the umpire begins calling balls.

This year, eight balls will send the batter to first with a walk. Last year was nine, and there’s talk that, down the road, it could go down to six. The aim: speed up games that now take between 3 ½ to 5 ½ hours.

If the batter refuses to swing at five hittable pitches, he gets a warning to get a move on.

If the batter’s hit by a pitch, it’s called a ball. There’s no free ride to first base.

Then there’s the dreaded “Bamboozle.” When the batter fouls one off, if a fielder catches it on the first bounce, the batter is out.

The base ball – two words - has a “hardness like skin over bone.” A dozen can vary in quality. Stitches pop; lumps warp them out of whack (once hurlers discovered the wavering uses of an oblong horsehide, they refused to replace them).

Bats are round and heavy, with some grips wrapped with twine. There’s a movement to make flat-faced, cricket-like bats legal (and they will be, in 1885).

Probably today’s biggest controversy: a few players on both sides are wearing a glove. Flat as a pancake, with no fingers or padding, they came into the game in 1875. Charles Waite of the St. Louis Brown Stockings began wearing one, he said, to “save my hand” (he chose the color brown because it was the most “inconspicuous” and wouldn’t attract attention). Players around the league, even his teammates, gave Waite living hell because “real men don’t wear gloves.”

Players using one for today’s game get a razzing too. They are part of the new “kid-glove aristocracy.” And here’s the other reigning controversy: foul, abusive language has crept into this “gentleman’s game.”

There are no dugouts. Players sit on benches. In the big leagues, they’ve made so many unfortunate remarks about the opponents that umpires now institute fines: shout “You make me sick!” and pay $10.00; “You’re rotten” goes for $15.00.

But back here in San Diego the verbal boundaries are less clear. And coaches at first and third can run up and down the foul line and heckle the hurler to their heart’s content – as long as their ardent vocalizations remain sanitary.

The game’s about to start. No one says “play ball.” The scorekeeper announces the first player to bat and the man on deck — and off they go.