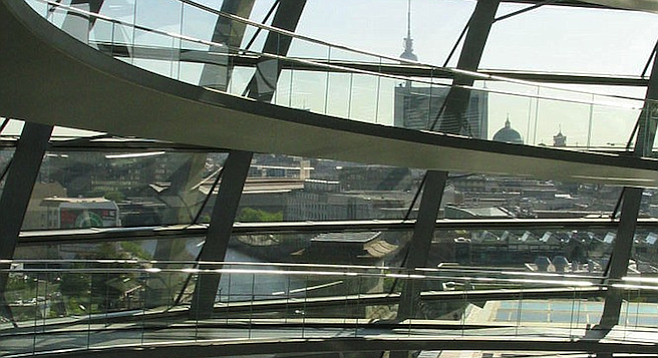 The city's chock-full of culture, monuments and off-the-beaten-path finds.

Berlin was always on our list of places to go someday, but the timing just never seemed right for one reason or another.

As it turned out, May 2015 was the 70th anniversary of the end of World War II in Europe, so it was a great time to go. We wanted to get an updated picture of places we had heard and read so much about. 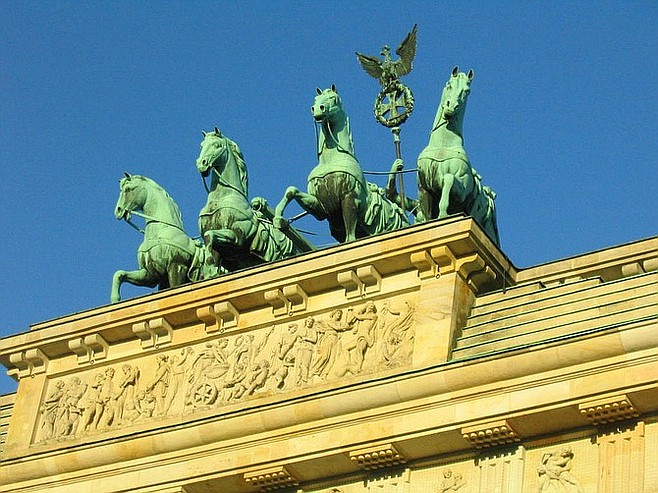 Blue sky above the Brandenburg Gate.

Touching down in Berlin, we knew this would be where we would find more history per square meter than anywhere else. The airport bus dropped us off in the Mitte, the historic center of Berlin, where the Brandenburg Gate, the Reichstag building, and other memorials and museums are located. From there it was a healthy walking distance, or a short ride on the S-Bahn, to our small hotel at the edge of the Kreuzberg neighborhood.

Notoriously gray and dreary, we found the weather in mid-May to be comfortably sunny and a little bit cool most of the time. On such lovely days, we were more interested in soaking up what history we could by wandering around this iconic city rather than spending too much time in museums. 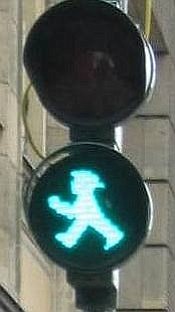 The ampelmann wears a hat in "East" Berlin.

Berlin, like many cities with history, is best explored on foot and on public transit. Even locals agree that the trains can be easier than taxis, and we found all forms of transit to be convenient and punctual.

You don't have to pay anything to walk along the trace in the sidewalks and streets that shows where the Berlin Wall had been. We often found it disorienting and difficult to know which side was which. We were told that one way to know is to look at the figure on the pedestrian crossing signal, or "ampelmann." If he has a hat, you're in what was the east; otherwise you're in what was the west. 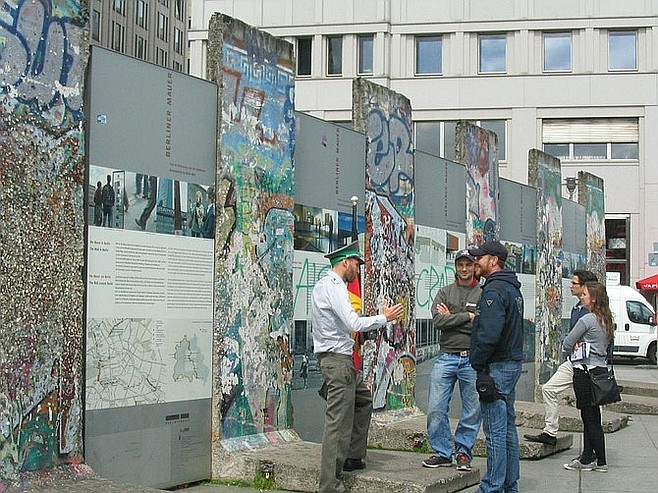 As I lingered over coffee and a slice of apple cake in an outdoor cafe in Potsdamer Platz, wrapped in a fleece blanket watching the farmer's market vendors set up their stalls, I had a hard time trying to get my head around the concept of a militarized wall down the middle of such a prominent and bustling square.

Stunning views of Berlin could be seen in all directions as we climbed the winding ramp inside the glass dome atop the Reichstag building (top).

The symbolic point of the glass dome is to show light and transparency on the legislative process. Some say the practical purpose of the hole on top is to exhaust the hot air coming out of the legislative chamber. It was free, even with the audio guide. However access is limited, so you really do need to reserve in advance. After a couple attempts we were able to secure a spot online for the next day.

Throughout the city, in the streets and parks, there were informational plaques along the main thoroughfares to provide context. In many locations, there were photographic exhibits that showed side-by-side photos of the same view prior to 1930s (pre-war) and around 1945 (after being bombed). Seeing the now vibrant city, it challenges the imagination. 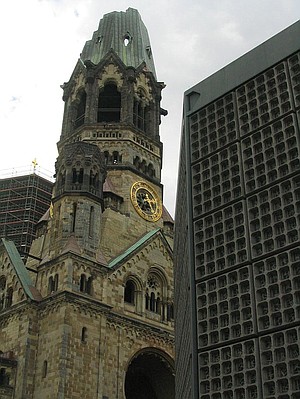 There are of course, many monuments and memorials in Berlin, but the one that sticks most vividly in my mind is Kaiser Wilhelm Memorial Church. It's the remains of a bombed-out church right in the middle of a modern city that grew up all around it. Instead of tearing down or rebuilding the church, they just stabilized it and let it stand as the perfect monument to what happens to real people and real places during a war. No interpretation, or even much imagination, is needed to feel the tangible reality of destruction in this space.

A little off the beaten tourist track we found an obscure museum dedicated to the East German brand of the KGB, or the Stasi. Located in an old headquarters complex, you can feel the spy-era history in the air at the Stasi Museum. It was fascinating to see on display genuine articles of a history that one might have thought was just Cold War–era fiction, from the infamous files kept on people to the spy cameras and "bugs" used for eavesdropping.

We made our way back to the west along Karl Marx Allee, heading towards the famous TV tower near Alexanderplatz. Passing by fading examples of communist-era architecture, we paused to read the historical plaques along the way and tried not to get in the way of multitudes of commuters on bicycles.

I'd heard that Germans relish the outdoors wherever and whenever they can. We observed that all it took was a little patch of blue, and they were out there: in the public squares like Alexanderplatz, in beach chairs on the river banks with their coats on having a beer and a snack, bicycling or strolling in the lovely parks and along riverwalks.

The "Unter den Linden" is a long, tree-lined pedestrian walk that in some spots is reminiscent of the Prado in Madrid, and other spots is a bit of a tourist trap. We continued on, and it lead us to the Großer Tiergarten park, an expansive urban green space where chestnut trees, lilacs and rhododendrons were blooming everywhere. A climb to the top of the Victory Column shows a city with so much gray, and the park as an oasis of green and flowering purple and pink.

Sampling local tastes is part of my travel experience, and we knew we needed to search out the famed currywurst. When you get it from an "imbiss" or snack vendor, it's just a sausage with ketchup and curry powder. However, we chose to try ours from a nice little place that served it with a house-made masala sauce and fries.

Sitting at a tree-shaded outdoor table along the river Spree with an incredible view of the Berliner Dom, it was lovely way to take a break with a refreshing draft wheat beer and rest our weary feet. 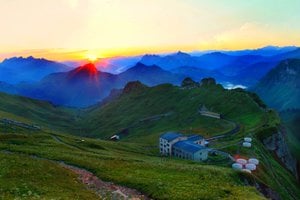