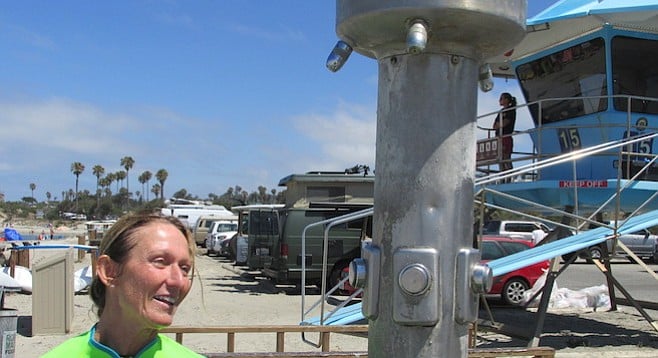 On Wednesday, July 15, the outdoor showers at San Diego’s four state-park beaches were scheduled to be shut off, in compliance with the governor’s mandated 25 percent reduction in water usage. The cold-water shower towers used to wash the salt and sand off of bodies, bathing suits, and boards is supposed to save, statewide, 18 million gallons of water annually.

Garratt Aitchison, San Diego district superintendent for California State Parks, says the decision was not made lightly. “We know it’s an inconvenience to the public. But we don’t have golf courses and ballfields to conserve,” said Aitchison. The beach showers were at the top of the list, over toilets and sinks and campground hookups and showers.

Yvonne from Carlsbad is a stand-up paddleboarder who says she goes out at Cardiff Reef every day, and she’s bummed. She thinks it’s ridiculous that state officials suggested beachgoers bring their own water.

“My water has to come from somewhere. It’s the same water,” Yvonne said. She also feels that having paid the state’s annual $195 parking permit fee that the showers should stay on.

“It is what it is, every little bit helps,” said surfer Ian from Cardiff. He believes it’s a “first-world problem” — not much to worry about, and most surfers carry rinse-off water with them anyway.

The water ban will affect the state’s day-use beaches at Imperial Beach (Silver Strand), Torrey Pines, Cardiff, and Carlsbad, but not the showers in state-beach campgrounds, nor the state-owned beaches leased to the City of Encinitas: Moonlight, Beacon’s, and Stone Steps.

Doing the math: the shutting down of outdoor showers at the state’s 38 beaches reportedly stops the usage of 1298 gallons of water, per day, per beach. Compare that to an inflatable kiddie pool 12 feet in diameter and 36 inches deep that holds 1779 gallons (at a cost of $15 or less to fill up.)

At the Cardiff Reef parking lot shower tower, each of the water-saving showerheads produced one cup of water each time the button was pushed. Each shower stayed on for five seconds before automatically shutting off.

According to the L.A. Times, the parks department's 278 total parks have already managed to meet the state's 25 percent water-reduction mandate, prior to the ordered shower shut-off.

But, as Aitchison pointed out, while the parks department may have accomplished water savings statewide, local water districts up and down the state have their own restrictions. Carlsbad is mandating a 35–38 percent reduction.

He did have some good news for beachgoers. With the showers shut off, it gives the parks department time to replace some of the aging towers.

When will the beach showers be turned back on? To paraphrase an old Johnny Carson joke, when people are drowning from the drought (a reference to what some meteorologists are now forecasting — a record wet winter this year).

Aitchison says it’s up to the governor to declare the drought is officially over.

Maybe I missed something but the parking fee, as I understand it, allows one to park their car. I doubt that anywhere on the permit does it state park and shower permit. Of course the devil is always in the details and the right to shower may be in the fine print.

If the state had any common sense they would focus the efforts on the water shortage in ways which maximize savings but minimize impact.

Next time I go to the beach I'm going to go into the bathroom and flush of the toilets an extra time in protest.

Yes, good plan. That will certainly teach everyone not to mess with you.