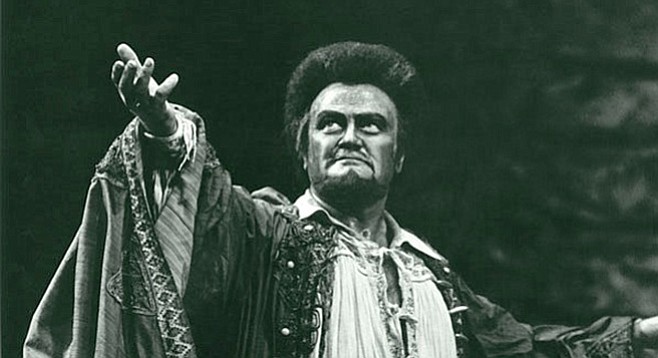 Do great singers ever really die?

Jon Vickers died on July 10, 2015. He had been retired since 1988 and had a prolonged struggle with Alzheimer’s.

It’s a strange phenomenon when an artist of his stature dies. The first reaction, if we’re honest, is, “I thought he was already dead.” Brutal, right? No, not really. First of all, he stopped singing before I had even heard of him, yet I’ve been a fan for years. Second of all, when an opera singer retires it’s almost as if they pass away. Maybe this is why Placido Domingo continues to sing?

Vickers is a singer that new generations will “discover” for years to come. His voice was massive yet beautiful. That is rare. It is also rare for a singer to excel in Wagner and also the dramatic Italian repertoire such as Otello and Canio. The great Italian dramatic tenors never considered singing Wagner. Vickers also owned French roles such as Samson and Don Jose from Carmen.

When it comes to Wagnerian tenors there are two: Melchior and Vickers, and then everyone else. Vickers does have some holes in his Wagnerian resume. No Lohengrin and no Tannhauser or Siegfried. His Tristan makes up for that. He might be the greatest Tristan of them all. It can also be argued that his Parsifal from Bayreuth in 1964 is the greatest recording of any Wagner opera.

What set Vickers apart from other singers of all voice types was his acting. I’ll never forget the first time I saw the video of him singing Si per ciel from Otello. When he makes his dramatic gesture on the beat after singing, “sangue, sangue, sangue” it gave me chills. As the duet continued I realized the most surprising thing about it was that it worked because it shouldn’t have. It’s over the top and cheesy and melodramatic and tackie because he did it in time with the music but he did it with such conviction that it was none of those things.

Where things get crazy with Vickers is in Peter Grimes. The role was written for a tenor, Peter Pears, with a voice type opposite of Vickers. Yet Vickers will remain the singer who created and established the role of Peter Grimes, not Peter Pears. Jon Vickers as the fisherman remains iconic.

There are few singers who are so closely associated with a role. Maybe Nilsson as Brunhilde, Callas as Tosca, or Caruso as Canio. Vickers is in that conversation as Peter Grimes.