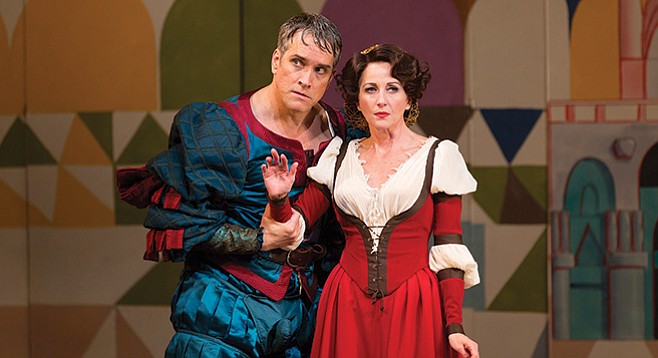 The Con is on, the one week of the summer where Hollywood backs away from a major release to play wet nurse to a bunch of duded-up fanboys in celebration of everything that’s wrong with contemporary cinema. What better time to brush up on a stage-to-screen comparison of Cole Porter’s Kiss Me, Kate, opening July 9 at the Old Globe?

Did I really want to step that far out of my comfort zone by venturing into a “legitimate” house and watching actors stand before me, pretending I’m not there? And how much more lifelike could it possibly have been than the Technicolor, two-strip stereoscopic presentation of MGM’s 1953 adaptation I caught several years back at Hollywood’s 3D Expo? 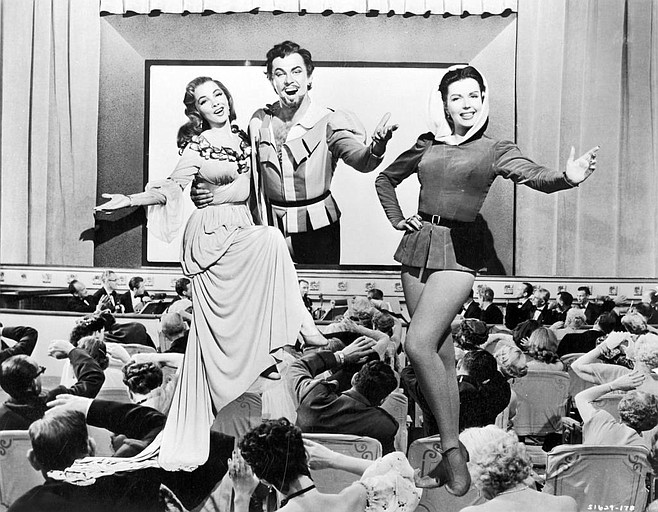 Correct me if I’m wrong, but isn’t there this nasty habit of stopping the proceedings dead in their tracks while the audience applauds after each musical number? Were I to hit pause and bring hands together for every moment of genius Citizen Kane exudes, it would take days to get through the DVD.

It wasn’t that my parents were against adding a little culture to their son’s life. I distinctly remember wishing we had stopped at a downtown theater for a matinee performance of Jerry Lewis’s The Errand Boy rather than continuing up the road to the Blackstone Theatre’s production of The Sound of Music. The price of theater tickets are and always will be a bit of a luxury reserved for special occasions like Dustin Hoffman as Willy Loman or Martin Scorsese’s The Act. At the end of the day, movies are still your best entertainment value.

Then there was that amateur production of The Princess and the Pea my aunt roped me into while visiting her in New Orleans. Where do you get your gaul big enough to pull seven-year-old little Scooter onstage and demand that I participate in your dance? It forever scarred me. Not a visit to a playhouse has passed where for at least a moment the thought of forced audience participation hasn’t crossed my mind.

When was the last time I attended the theatre? When they brought Molly Ringwald and Sweet Charity to town? Or was it the Marie Hitchcock Puppet Theatre’s revival of Bertolt Brecht’s Mother Courage and Her Children? My current girlfriend’s been hocking me a chinik to take her someplace other than the movies and the Chicken Pie Shop, so what the hey? And after living in this town for going on 16 years, isn’t it about time I paid a visit to one of Our Town’s cultural landmarks?

KMK opened on December 30, 1948, ran for 1077 performances, and won the first Tony Award presented for Best Musical. In his review of the film, New York Times critic Bosley Crowther noted the musical comedy had “kept Shakespeare’s name on the theater boards of New York for a longer run than it had ever had before.”

Writers Sam and Bella Spewack modeled their recently divorced leads, Lilli Vanessi and Fred Graham (played at the Globe by Anastasia Barzee and Mike McGowan), on the First Couple of Broadway, Alfred Lunt and Lynn Fontanne, and the egomaniacal caterwauling that went on during their 1935 Broadway production of Taming of the Shrew.

The biggest surprise was how closely the film mirrored the play. Perhaps the set-bound nature of the piece was behind MGM’s decision to select it as their first musical (and second feature) to be shot in 3D. For some violently insane reason known only to the studio brass and screenwriter Dorothy Kingsley (remembered for Esther Williams’s musicals and helping to bring Valley of the Dolls to the screen), Metro insisted the by-all-means blah Ron Randell drop in as a Cole Porter substitute who in turn plays cupid to Fred (Howard Keel) and Lilli (Kathryn Grayson).

Wanting to showcase the talents of leggy contract player Ann Miller, the role of Bianca was greatly expanded for the film adaptation. That meant repositioning “Too Darn Hot” from its placement as intermission comeback tune in the original to the show-stopper with which Miller opens the picture. Choreographer Peggy Hickey’s staging at the Globe is darn hot, indeed. James T. Lane and the cast worked the audience into a fervor. My foot was tapping so hard it came close to kicking the glasses off the guy seated in front of me.

More Miller accounted for one more cinematic casualty. Fans of “Another Opening, Another Show” can hear it played briefly in the background as a musical bridge. Not true of the Globe’s presentation, where Aurelia Williams braces the crowd with a deep, spirited rendition of the showbiz anthem.

The film version was to be director George Sidney’s (Anchors Aweigh, Show Boat) eighth and last musical for MGM. Never one to run in the same pack with Vincente Minnelli or Stanley Donen, Sidney’s finest addition to the genre still lie before him with a movie to Columbia and the big screen adaptation of another Broadway smash, Bye, Bye Birdie. Sidney, aided and abetted by one of Technicolor cinema’s best friends, cameraman Charles Rosher, has a bonny time stereoscopically piloting the characters and camera through Fred’s spacious (M-G-M) studio apartment. After that, it’s pure exploitation as the players hurled everything from scarves and dice to dinner plates at the cardboard glass-wearing crowds.

All was flowing smoothly until hitting a rough patch of politically correct revisionist thinking. My hope this evening was to see the play exactly the way it was presented in 1948. A little research and a listen to the original cast recording of the “Tom, Dick, and Harry” number reveals that the “dicka-dicka-dick” chorus can indeed be interpreted as Bianca’s lusting after her Tom’s hirsute protuberance. (Let’s see Cole Porter rhyme that!) I’m all for Barzee’s punching “Dick” in the lyrics. Darko Tresnjak’s addition of a nude statue of Neptune for his leading lady to call attention to with both index finger and riding crop is a bit much, but as the director told the L.A. Times, “She needs to slap the penis.” 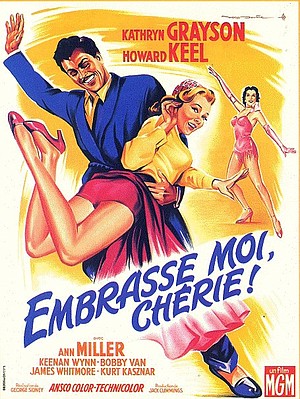 Known for Lilli’s infamous second act spanking — the image of Grayson over the actor’s knee and Keel’s arm frozen in mid-slap dominates the promotional art — Tresnjak fights sexism with sexism by balancing each of Lilli’s bottom-poundings with kicks to the groin. While you’re at it, why not alter the name of Shakespeare’s original to Funny, You Don’t Look Shrewish? Smuggling a penis joke in a 1948 play and its subsequent Hollywood bump-up are moments to treasure. The last thing 2015 audiences need is another “dick” joke.

The same holds true for Megan Sikora’s turn as Lois Lane (didn’t the Spewak’s get the Superman connection?) aka Bianca. If Tresnjak took such objection to the misogynistic paddling, why ask Sikora, who clearly knows how to earn laughs by wrapping her voice and legs around a song, to pitch her performance just south of Vivian Blane’s “Doll,” Adelaide, or Judy Holliday in Born Yesterday? Hasn’t this type of nasal-pinched ditz been done to death?

The rest of the experience was strictly first cabin. The sightlines were as perfect as the seats were comfortable. Not quite the La-Z-Boy recliners they have at AMC La Jolla, but damn comfortable nonetheless. Nor were there 12 minutes of closing credits to wade through. The usher handed them to me on the way in! The cast put on a great show, always equaling and at times surpassing the Hollywood players.

Truth be told, I’m a major Keel-head. If ever we have the good fortune of meeting in a bar, slip me a couple of drinks and request a chorus of “My Defenses Are Down.” Close your eyes, listen, and this heel will go full Keel. Mike McGowan takes command of the stage and matches his predecessor’s playful performance note for note. The same can be said of Anastasia Barzee who easily outpaces Kathryn Grayson at every turn. 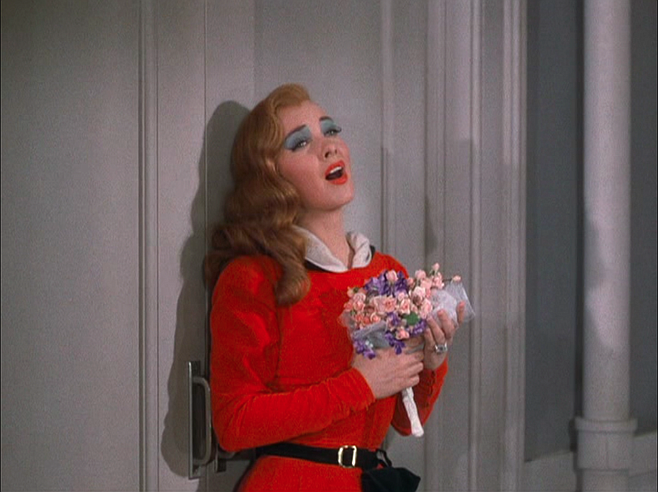 So in love with blue eye shadow

Robert Sambrato and Jack Bender’s dynamic lighting scheme coupled with scenic designer Eileen McMann’s turntable sets gave me an inkling of what keeps theater mavens coming back for more. And kudos to costume designer Charlotte Davaux Shields for not following in the footsteps of Metro costume designer Walter Plunkett and makeup creator William Tuttle. It’s always been my belief that Grayson never saw the red Santa’s helper getup she wore during her “So in Love” solo. The five pounds of blue eyeshadow made it impossible for the actress to open her eyes.

A little over-theatrical theatricality goes a long way, but isn’t playing to the rafters Broadway’s answer to a Hollywood closeup? Or was it the other way around? A man could get used to this theater life, particularly when there’s a movie companion piece to consult. Let it be known that this Kate wasn’t as great as its movie mate. It was better.

Kiss Me, Kate runs through August 2.

A fantastic article! A couple of corrections, though. Fabio Toblini is the costume designer and it is Sikora punching the "Dick" lyrics.

Ooops! It's Barzee who whips the you-know-what. And apologies to Mr. Toblini for not including his name along with his assistant's. Thanks, entspeak!