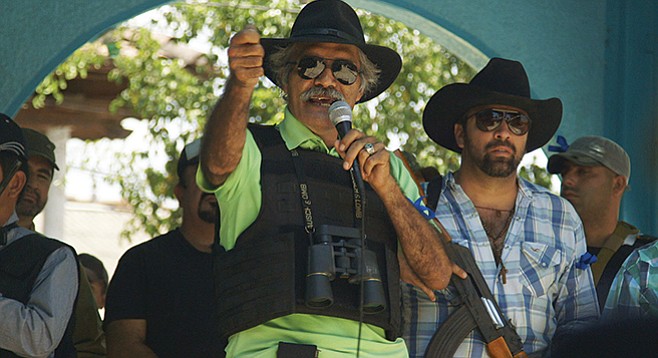 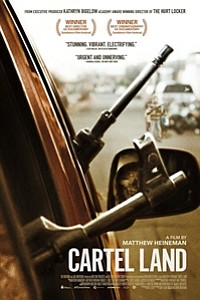 The excellent documentary Cartel Land gives an embedded view of two vigilante group leaders, one on each side of the US-Mexico border: Tim “Nailer” Foley of Arizona Border Recon, and Dr. Jose “El Doctor” Mireles of the Michoacan Autodefensas. Their common enemy: the Mexican drug cartels.

Matthew Lickona: Why spend as much time as you did with the people in Arizona when so much more of the dramatic action takes place in Mexico?

Matthew Heineman: I was fascinated by what motivates men and women to fight for what they believe in. Just seeing that play out throughout history: armed groups rising up to protect their town or village. At its heart, the film is about these two men: both are 55 years old. Both believe the government has failed them. Both have taken the law into their own hands to fight for what they believe in, though obviously, the circumstances are different. In Mexico, 80,000 people have been killed and 20,000 have disappeared, whereas in Arizona, there’s more of a fear that the Mexican drug wars will seep across our borders. I was interested in seeing how their stories played out differently on either side of the border.

ML: There were several points where I found myself thinking, “I can’t believe this is happening.” The action played out so much like a well built fictional story. What decisions did you have to make to give it that kind of narrative?

MH: Praying to the documentary gods? I had absolutely no idea what an adventure I was going to go on. I started out making one film and I ended up making a completely different film. I thought I was telling this very simple hero/villain story: guys in white shirts fighting against guys in black shirts. Over time, the lines between good and evil became quite blurry, and that’s what drove me to keep going down there, to keep trying to understand what was happening. And the story was an ever-moving target. That was the hardest part, staying on top of the story, being open to the story changing. If I’d gone in with an agenda or a goal or anything, it wouldn’t have worked. So many moments wouldn’t have happened. [As it was,] the story unfolded in a way that you couldn’t have written. If you did write it, it would seem fake. But it was real. I’ve had interviewers ask me, “What was it like to work with actors in those recreated scenes?” And I answer, “It was all real.”

ML: Dr. Mireles is an intelligent man and the leader of a movement. And yet he gave you an astonishing degree of personal access. Could you talk about getting that access and developing that relationship with a subject?

MH: To me, access is everything, and for this film especially. There’s been a lot of coverage of the narco-wars and narco violence. But I wanted to get down into the culture and see how this narco violence was affecting everyday people, and also their response. I told Dr. Mireles when I first called him — I had read a news article — “I want to come down. I don’t want to come down for a day or two, or three or four days. I want to come down and follow the story of the Autodefensas and see where it goes.” And he said, “Come on down.” A lot of scenes weren’t the kind of thing where you could call up the subject and get those moments. Those happened after months and months of spending time with them.

ML: Is the title Cartel Land as despairing as it sounds?

MH: Yeah. I wanted to portray the suffering of everyday people. The fact that everyday people were forced into this lawless world that was largely controlled by the cartels. They either had government officials and local police on their payroll or were directly colluding with them. And that’s a scary world to live in. And to a lesser degree, the same could be said of southern Arizona along the border. You look up in the mountaintops and there are cartel scouts looking at you. You can hear them on the radio, talking about you and about pushing drugs and people in the valley. It’s not comparable to Michoacan, but you do feel it a little bit.

ML: Can you talk about orchestrating the scene with the meth cooks?

MH: Meth is the lifeblood of the cartel. It’s their cash cow. It was an important part of the story. I asked people if they knew anybody for eight months, and eventually I gave up. And then on our second to last shoot, we got a call saying, “Be in the town square at 9 p.m. and you’re in.” These men with masks drove us into a field where another group of masked men drove us into the forest. I didn’t want to have anything over my head or be thrown into a trunk, and in exchange for that, they got to have their faces covered. I thought that was a fair exchange. We arrived, and I couldn’t believe it. I had always imagined this trailer setup with halogen lights or something. Instead, we’re in a forest, and I don’t shoot with lights, and the sun was going down. That was a problem. The head chef started showing me the process of cooking meth, and he had this little flashlight, and that’s how we lit the scene.

Yeah, but who is this Foley character? Is he nothing but another Chris Slimecox or or Jim Gilchrist???

Saying the "government" as failed him sounds like the Jan Brewer line.

And no hardball questions to Foley like, he blames the undocumented because he couldn't find a job in construction??? Then he gets his news from Faux??? LOL

On the Mexican side, there are many missing pieces. Under what circumstances were those 15 people killed? Where are the municipal police and why do they appear in only one scene??? Did the Autodefensas coordinate with them or were they antagonists???

It's more a portrait of two men then a comprehensive investigation into their activities. He lets the men present themselves, and he presents the circumstances around them. That's good documentary work, I think.

I think it is at least implied that the municipal police and the Autodefensas were not working together, that the Autodefensas formed in part because they felt they could not trust the police due to corruption.