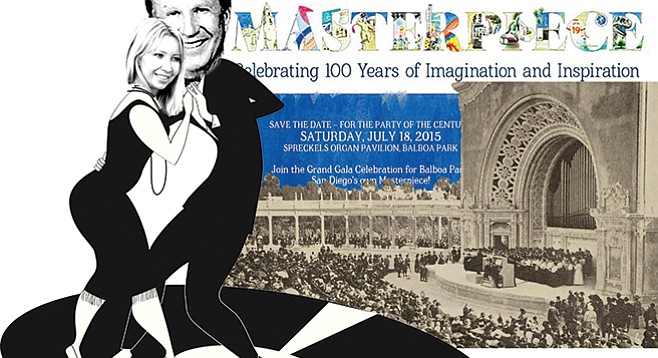 Veteran political observers call it Douglas Manchester’s last laugh. Just before the voluble real estate developer from La Jolla sold what he called U-T San Diego to Tribune Publishing of Chicago in May, he gave away 100 full-page advertisements in the paper to Patrons of the Prado, which is promoting a July 18 exclusive high-society charity gala at Balboa Park’s organ pavilion. Tickets start at $500 a head, rising to $1000 a person with inclusion of a July 14 VIP patron-only party. “Museum of Man Adventure and Indulgence guests will enjoy a memorable reception exclusively for our VIP donors featuring cocktails, a gourmet summer dinner, and live entertainment,” says the group’s website. “Guests will have the opportunity to take an exclusive tour to the top of the California Tower to enjoy a spectacular view of lovely Balboa Park.”

As is customary with Manchester’s largesse, the former publisher gets top billing on the event’s website, along with his Russian-born second wife Geniya, as “presenting sponsor.” Next is the “media sponsor,” listed as U-T San Diego, although the new owner has changed the paper’s name back to San Diego Union-Tribune. Then comes the evening’s “honoree,” none other than Kevin Faulconer, the Republican mayor pushed to victory by favorable U-T coverage, editorial endorsements, and at least $356,000 in Manchester contributions. “This is yet another way San Diegans are uniting this year to celebrate and elevate Balboa Park for its centennial celebration,” Faulconer says.

Not mentioned is the ultimately bungled public centennial party once planned by ex-mayor Jerry Sanders that ate up $2.6 million in taxpayer subsidies before collapsing in a city hall scandal. Reached by phone last week, Del Mar realtor Ellen Bryson, past president of the Prado patrons, says the non-profit’s goal is to raise $1.1 million, to be distributed in $100,000 allotments to each of the 11 park museums favored by the organization.

According to Bryson, the group has raised over $2 million since 1997, though “after the crash the numbers dropped.” Just how much is evidenced by the group’s latest federal financial disclosure filing, covering the 12 months ending last September 30, which shows the nonprofit took in $211,388 in contributions and grants. It paid out $28,920 each to the Fleet Science Center, the Museum of Art, and the Old Globe for a total of $86,760. The money came from annual membership dues of $15,200 and a gala fundraising event that grossed $280,488. Total direct expenses for the gala, including $44,234 for food and beverage and $47,961 for entertainment, were $176,114.

Judging by the description of the coming July event on the patrons’ website, the entertainment tab for what is being billed as “the party of the century,” by local spectacular producer NRG, could be substantial. “This will be a musical night to remember as NRG brings to the Organ Pavilion stage a brand new multimedia entertainment experience like no other. The audience will take an energetic journey through the decades 1915 to 2015, complete with period costumes, live band, dancers, and a giant LED screen adding to the experience. In this one night NRG will swing, jump, jive, get down, go pop, and rock, from Glenn Miller to The Stones to Lady Gaga with dancers swapping out fantastic costumes throughout the show.”

OBSCENE--in the fullest sense of the word.