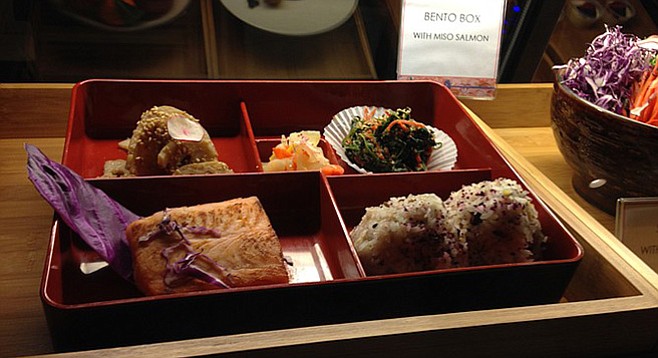 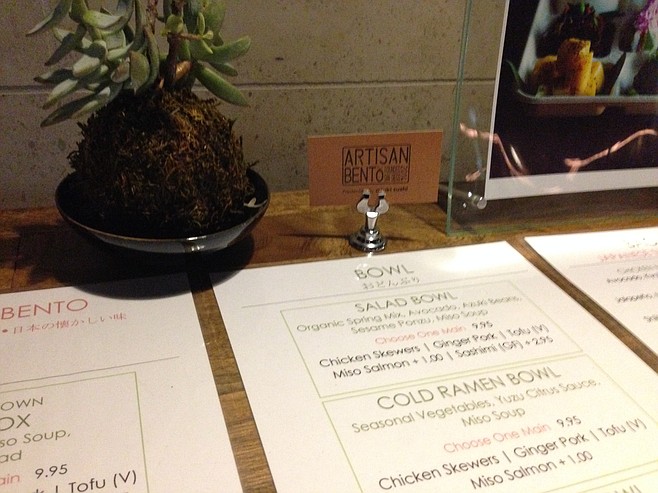 Not a lot of signage up at this park-adjacent spot. 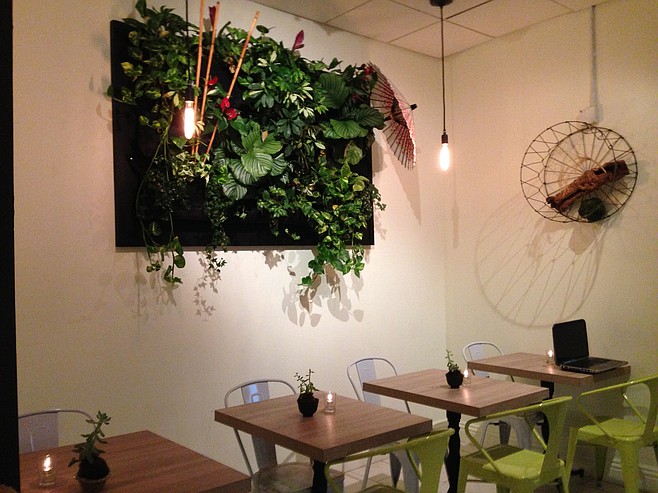 Living wall decor lets you know this place is modern.

My fondness for bento boxes and anything labeled "artisan" have converged in Banker's Hill, with a new dining concept set up by the proprietors of Azuki Sushi. Artisan Bento seeks to elevate the idea of a bento box by making it customizable, offering a choice in proteins and side salads to fit within the classic style of compartmentalized tray favored by Japanese diners on the go.

Dining in might actually make more sense here, as the décor kind of goes out of its way to be hip as well as Japanese. At one end of the restaurant I spotted a lovely living-wall arrangement, at the other an ultra-contemporary, spherical chandelier over window seating that looks out at the intersection of Laurel and 5th.

In between there's a simple lunch (or dinner) counter, banked by a glass case containing sample dishes. These dishes, including a bento box and rice bowl, seem pretty real, but then so do the plastic food models found in such counters in Japanese soba houses and the like. I spent far too much time trying to figure this out when I should have been deciding what to order in my bento.

First up: protein. Chicken skewers, tofu, miso salmon, and sashimi are offered, but I settled on ginger pork. Order a basic box for $9.95 and you get a single side salad to go with miso soup and multigrain rice. I opted for a sesame spinach, though I might have just as easily embraced the lotus root, poki [sic], or sweet potato salad. At $13.95, the Delux Bento nets you two salads and a dessert. I kept it simple this time.

And I took it to go. Half the value of this spot is meant to be its approach to the take-out concept. I'd assumed this would mean it would come out of the kitchen fast, but I did wind up standing around for a few minutes, speaking with a couple of local fans who already count themselves regulars just a week or two into the restaurant's tenure.

When I finally got my meal, the take out bento tray looked far less enticing than the polished eat-in box. To be expected. The bigger issue came about with the soup, which didn't make it home without leaking. I know – order soup and what do you expect? But I've had several take out soups survive a short drive thanks to the quality of a good sealed container. What little miso I got home with tasted worth a better seal. 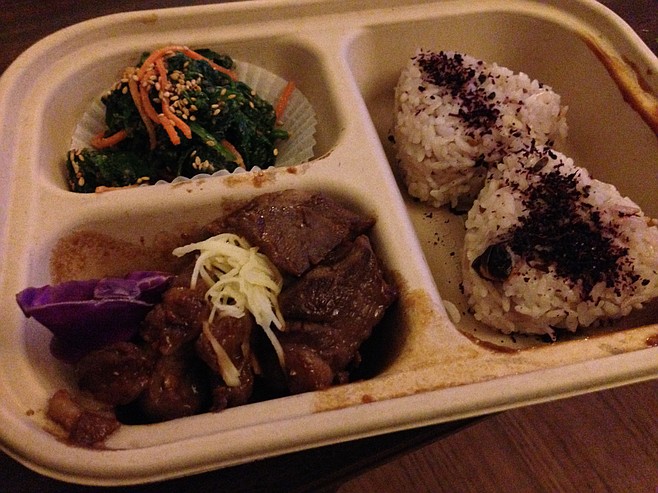 The to-go orders have a little less class to them. Bento Box. Artisan Bento.

The mess didn't invade the bento too much, so I dug into the pork. Ginger. Definitely ginger. Just savory enough to work, but if you're not feeling a ginger bomb, spend the extra buck to make it salmon, or 3 to get that sashimi. The spinach dish had the same effect, only with braised spinach and adherence to a lot of sesame. I happen to like ginger and love sesame, and they go together well, so I was content.

Most interesting to me were the multigrain rice balls, which included brown, black, and white rice, plus quinoa, two kinds of millet, flax seeds, sesame seeds, chia seeds, pearl barley and a couple of beans. Like most of these dishes, the rice balls managed to feel Japanese without being traditionally authentic, showing a little playful creativity with this bento concept. Artisan? Maybe. Moreso it rides that line between contemporary and classic, approachable to health-food fiends as well as hipster foodies. I've never really seen something like this before, and can't swear it'll work. But being the sort of guy sitting right in the middle of this restaurant's crosshairs, I liked it.