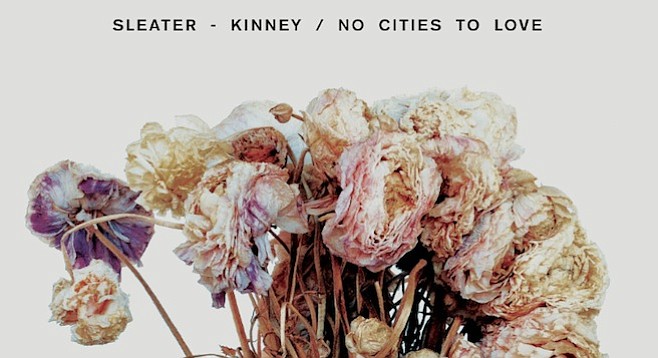 Sleater-Kinney's No Cities to Love

The band that kept the heart of the riot-grrrl movement pumping is back, in a wicked way. Sleater-Kinney’s No Cities To Love burns bright and flames out on cue, blazing a trail for other punk outfits to trace and embrace.

The moods on No Cities race from ebullience to negativity to unity to all-out rockfest, as on the victorious “A New Wave” and the rabble-rousing “Surface Envy." Opener “Price Tag” is a dark take on the economy’s bruising effect on the lower class. “With the good jobs gone/ it’s gonna be raw,” guitarist/vocalist Carrie Brownstein wails.

Sleater-Kinney’s explosive dynamics, forged by Brownstein and guitarist/vocalist Corin Tucker, are in turn fueled by Janet Weiss’s drum work, which shoves the energy forward. The chorus of “Hey Darling” honors Lita Ford’s glam-metal love song “Kiss Me Deadly,” with vocals seething with sexuality. “Bury Our Friends” is sonically muscular as it laments a life of dread in a “gilded age.” “We’re wild and weary, but we won’t give in,” they sing, as they flaunt the scars to prove it.

A New Wave by Sleater-Kinney

A New Wave by Sleater-Kinney

With No Cities, the members of Sleater-Kinney find themselves on the edge as they craft molten rock riffs, brick by brick, molding punk anthems packed with rage and deep-set frustration. Then they tear it all down. As the nihilistic “Fade” closes the album, all that’s left standing is the band’s grit, and the dust left by a few withering notes.