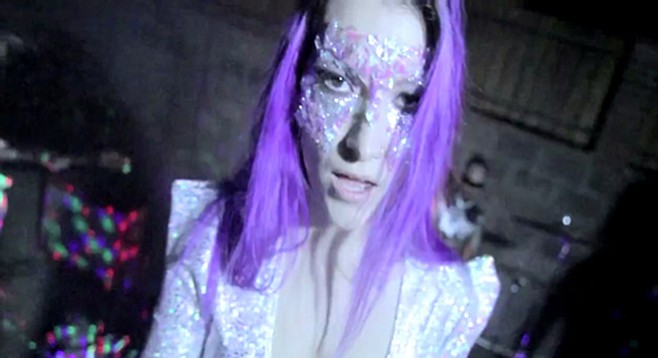 Around 400 local music videos are sprinkled among the 3900-plus band pages in the Reader’s Local Music Database, all playable from our video jukebox. Here’s our spin on the most recent additions.

"UNI" by The Lovebirds

From the Lovebirds album And a One, and a Two (recorded by Jeff Berkley and mastered by Grammy Award–winner Gavin Lurssen), the video for “UNI” is a love story featuring two former glee-club students of band cofounder Veronica May. She and Lindsay White croon softly of youth and strength in Balboa Park, at first with only the two of them singing, until they and the young lovers are joined by a group of LARPERS (live-action role players) that the women met at the park while writing the song. Ending on a swell of choral vocals, the duo (winners at last summer’s Grassy Hill Kerrville New Folk Competition for Emerging Songwriters) enlisted Jaymee Carvajal and Leylla Badeanlou to produce the clip.

Another duo, the more satirically bent Pony Death Ride, also features live-action role players at Balboa Park in their video for “Furries,” in this case that strange comiccon/ cosplay subculture whose apparent fetish involves wearing funny animal costumes and acting out as characters existing somewhere between Pepe Le Pew and Fritz the Cat cartoons. The pair stumbles upon a group of frolicking full-sized “creatures,” from a big spotted dog to a giant pink bunny, a gorilla, and a raccoon, all pretty much running around and acting like their counterpart critters.

"Better Than He" by The Burning of Rome

Recent triple-SDMA winners Burning of Rome went sci-fi for “Better Than He,” directed by Patrick Fogarty (who also helmed Black Veil Brides’ recent “Heart of Fire” video). An animated flying saucer hovers over the city and shoots an ominous beam down to where the band is performing a rowdy set, all dressed in silver spacesuits straight out of Lost in Space, with Aladdin Sane/Ziggy Stardust–inspired glitter-glam makeup and masks. The look suits their psychedelic drone, which wouldn’t be out of place on the soundtrack to Velvet Goldmine. Things get sweatier, faster, and fuzzier as they hit three minutes, when the band does its best to emulate the look and sound of Marilyn Manson’s Mechanical Animals.

Sunny Riverside is the latest single from Don't Get to Know Me, Jeffrey Joe's sophomore album (coming soon).

Kickstarter campaign is on the way. Please check back soon for more details.

For more information about Jeffrey Joe please go to http://www.reverbnation.com/jeffreyjoe