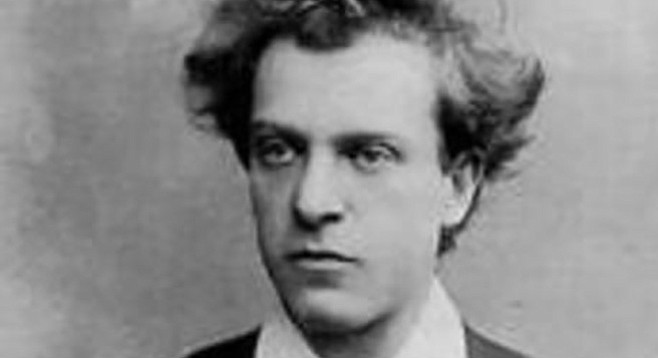 There is one piece of esoteric music which I wish, above all others, the San Diego Symphony or La Jolla Symphony would perform. That music is Hans Rott’s First Symphony in E major.

Rott wrote it when he was 20-years-old and it has become somewhat famous based on Mahler’s comments concerning Rott being the founder of the new symphony as he (Mahler) conceived it. The symphony was written in 1878 and was first performed in 1989.

For those for whom Bruckner and Mahler are the moon and stars, Rott’s First Symphony is a link between these two titans. I personally find the music to be astounding and significantly more fulfilling than Mahler’s First Symphony. The two young composers were roommates for a time during their conservatory days.

Rott’s style is influenced by both Wagner and Bruckner. Rott was a graduate of Bruckner’s organ class and attended the first Bayreuth festival in 1878.

Brahms, unsurprisingly, was not a fan and encouraged Rott to give up music. Brahms was not fond of Wagner or Bruckner. When Rott approached Brahms with his symphony Brahms ridiculed him and criticized him mercilessly telling him he had absolutely no talent. As it turns out, that was quite the “dick-move” by Brahms and a grossly inaccurate assessment — and people say Wagner was a jerk?

Wagner was a jerk but he obviously wasn’t alone.

Rott did not have Mahler’s unfailing belief in himself and snapped in 1880. On a train ride Rott pulled a pistol on a passenger who was trying to light a cigar. Rott claimed Brahms had stuffed the car with explosives.

Rott was admitted to an asylum, made a brief recovery but ultimately he was deemed to be beyond recovery. He died of tuberculosis at the age of 25. Bruckner and Mahler attended his funeral.

There are about 25 pieces of Rott’s 80-some compositions that remain in a state which allows them to be performed.

Thanks--I also looked him up on youtube, and listened to a couple of things there. Sad when talent is crushed and/or ignored.