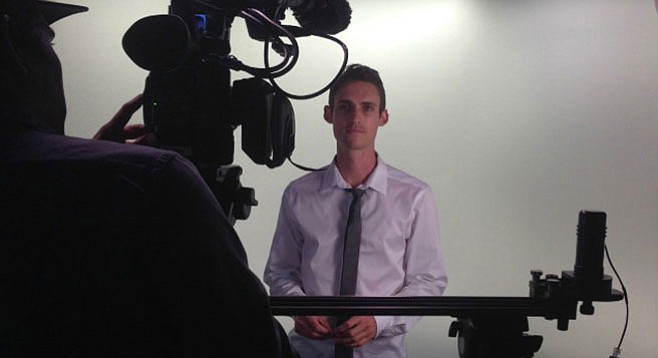 “The methods used to make this video and the crazy effect shots are unique and technical and haven’t been seen much before in music videos,” says Tolan Shaw of his new promo clip for “Eyes.” The single was played every day as the Local Break song on 91X for October, and its FX-heavy music video has already racked up over 11,000 views.

Cutting from black-and-white to color, the New Archaic vet is seen singing about “eyes in the back of my head” and how “she cuts me up with her liquor-fueled lie,” as his image breaks up into horizontal segments darting around the screen, independent of each other. The staccato guitar riff that anchors the tune is shown off with a flying-guitar shot that closes in on Shaw’s digitally isolated fingers, dancing up and down the fretboard by themselves, a trippy effect not unlike watching Thing from the Addams Family tap dancing inside a lava lamp.

“Basically, the video combines practical and visual effects,” Shaw tells the Reader. “For all of the sequences in the video where you see the heads turning and singing the song against the white background, the process involved standing on a rotating platform for a few hours at a time, with somebody lying on the floor spinning me, timed to a metronome with the BPM of the song, and me singing along with the song. Both forward and backwards.”

As for the dancing Thing fingers, “The guitar-solo portion of the video involved strapping the guitar to a stand in front of a green screen, with me lying on the floor or crouching in the most awkward position possible, and playing the solo without looking at my hands. I only played the lowest three strings of the guitar, so that they could mirror-image the shot in editing. I had to learn how to play that solo about five different ways, all different from the original way I played it.”

Shaw next plays a full-band show at the Merrow on Friday (January 23), and he has a matinee appearance at the Belly Up on January 31.