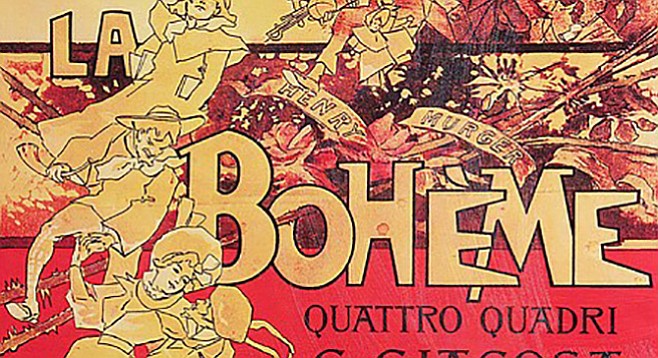 Why can Mimi and Rodolpho fall in love immediately?

La Boheme is the first opera of the still-in-existence San Diego Opera. Boheme is generally considered the world’s favorite opera and there is good reason for that. The story is moving and the music is ravishing, as only Puccini can be.

I want to talk about the first act and get into Puccini’s theatrical genius. I’m specifically considering Rodolpho’s aria, Mimi’s aria, and the duet that follows.

After the opening scene with his roommates, Rodolpho encounters Mimi, who loses her key. As they search for it, their hands meet and Rodolpho sings his famous aria Che gelida manina, “How cold your little hand is.”

In the aria, Rodolpho shares with Mimi, and the audience, who he is and what he does, and how her eyes have stolen his dreams. Only an Italian can say something such as that with a straight face.

Mimi then shares who she is and what she does and mentions that her real name is Lucia. In a splendid musical moment, she explains how much she enjoys the spring. We hear the music become warmer. It’s spectacular.

The roommates shout a few things from offstage and then Rodolpho and MImi sing a duet about how in love they are. Whoa, let’s pump the brakes here a little bit. Didn’t they just meet? How can they be in love?

I shall explain. If La Boheme were a movie, these two aria and the duet would be a montage of several dates. After the initial meeting we would see them at a sidewalk cafe followed by a date in the park. Then we would see her lean her head onto his shoulder at the movies. Ultimately they’d be walking down the beach at sunset, confirming that they were in love.

Well, she doesn't die right away, but this fantastic sequence of aria, aria, duet sets up our hearts to be broken at the conclusion of the opera.