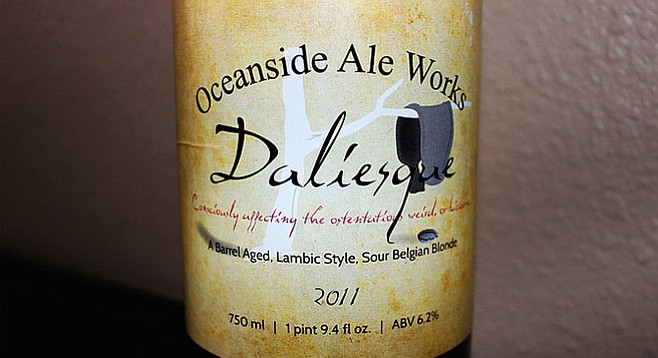 San Diegans are fortunate to have a wealth of local sour beer options. Though lambics, gueuzes, Flemish reds and browns, and the like are quite en vogue, increased labor, costs, and lengthy maturation cycles make them harder to make and, thus, harder to come by. Only a small percentage of craft breweries tackle such barrel-aged tart ales, yet San Diego boasts roughly 15 that do. Several are among the top sour producers in the country. But the three-year-old lambic serving as the first San Diego Beer News Beer of the Week of 2015 isn’t from expected sites of sour power like The Lost Abbey, Societe Brewing Co. or Alpine Beer Co. It comes from a brewery few even know have a barrel-aging program — Oceanside Ale Works.

Known more for sun-friendly beers like its Buccaneer Blonde and The Dude IPA, OAW has seawater and coastal culture coursing through its veins. Its tasting room comes across as party central with regulars raising pints with great gusto and regularity. It’s a laid-back place with a looseness that carries over to the beer. For years, owner Mark Purciel has dared to mix multiple styles of beer in the same stein, and last year I wrote about “beerbucha,” a combination of OAW beer and kombucha the brewery worked up with local operation, Kombucha On Tap. So, diversions from the norm are the norm at Oceanside’s longest-tenured brewing interest. Even so, I didn’t foresee the release of a barrel-aged sour beer from Purciel and company. Yet, it’s the most delightful surprise I’ve experienced in more than six years spent monitoring OAW’s progress.

Dubbed Daliesque, it’s a Belgian-style blonde ale brewed with a grain bill that’s 40% wheat. The beer is allowed to ferment in open vessels before being transferred to Johannesburg Riesling wine barrels, where it matures into what ends up in OAW’s wax-dipped bottles: a 6.2% alcohol-by-volume brew that pours a hazy, reddish-amber hue with barely a wisp of carbonation. The nose foretells of the apple and cherry notes that greet one’s taste buds before being overtaken by an acidity that’s assertive, but doesn’t go too far into the land of vinegar. Overall, the beer is soft in texture, but big on flavor, and a nice foray into sours by an unexpected entrant into the medium. It should be fun to see what they unearth from their barrel stock moving forward.