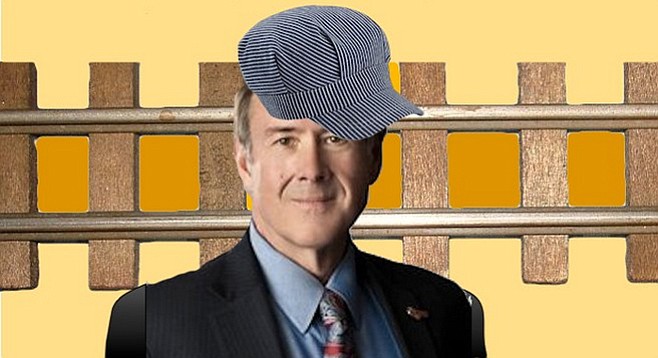 The binational Desert Line may soon be deserted by Pacific Imperial Railroad, the company that leases the 70-mile track stretching from the border near Campo to Plaster City.

Pacific Imperial, according to a statement from a Metropolitan Transit System spokesperson, failed to pay the first of two $500,000 lease payments to MTS, the owner of the track.

The railroad's fate has been in question for several years. Since taking control of the Desert Line in 2011, there has been little progress made to resurrect the line. In addition, accusations of fraud and money laundering have plagued Pacific Imperial and the shareholders who controlled the railroad under the name of Carrizo Gorge.

Last year, Carrizo Gorge's former CEO, attorney James Warner, admitted to hiding drug money for a client and has since been disbarred. Before changing names to Pacific Imperial, the railroad was fined $1.6 million for smuggling two pounds of marijuana from Mexico. Then there are the dozens of lawsuits involving the company's shareholders.

According to emails obtained through a public records request, despite the lack of progress on the line and an apparent lack of funds as shown by the missed lease payment, MTS honcho Paul Jablonski continued to go to bat for the company and continued to strike out.

Jablonski wanted to fix that. For months, the MTS chief tried to arrange a meeting between the railroads. He eventually succeeded. The meeting, however, didn't have the positive results he’d hoped for.

Jablonski's lobbying can be seen in emails during the months leading up to the December meeting. On November 19, 2014, Jason Vorderstrasse, political consultant at the U.S. consultate's office in Tijuana, responded to MTS's request for them to host a meeting between representatives from Baja Rail, Jablonski, MTS attorney Karen Landers, county supervisor Ron Roberts, and executives from Pacific Imperial.

Landers responded the following day by asking if Vorderstrasse could invite Tijuana mayor Jorge Enrique Astiazaran and "[bring] the parties together."

"I think Carlo would be good also, thanks for getting back to us."

The meeting took place on December 15.

Unbeknownst to Jablonski and others, Beltran was at work negotiating an agreement with another U.S. company, FPN-USA, run by the founder of Carrizo Gorge Railway, Gary Sweetwood, to haul freight on the Mexican side of the line. The agreement created another expensive obstacle for Pacific Imperial and essentially stripped them of any chance to connect the Desert Line with Mexico.

Now, with Pacific Imperial unable to make the lease payment, as well as the haulage agreement between Sweetwood and Baja Rail, Jablonski's time and efforts for Pacific Imperial appear to have been for naught.

I think this whole thing was nothing but a scam from the get go. The rail line failed eons ago. San Diego does not produce anything in any quantity that would make an eastbound rail worthwhile. Some goods are shipped out of San Diego by truck over I 8 but not enough to support even a small trucking company. Anyone with more than a single digit IQ could see it never would be viable except, of course, the MTS.