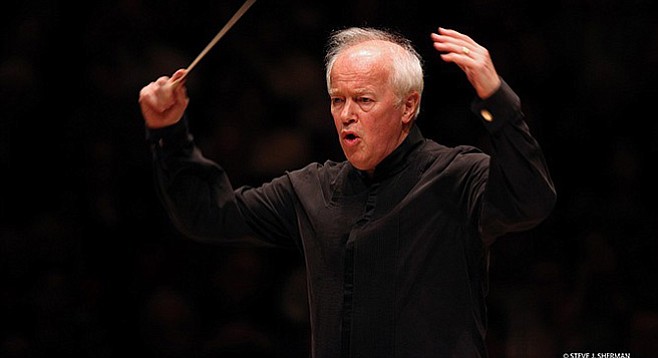 Sir Neville out, de Waart in

Sir Neville Marriner, known to many as the founder of the Academy of St Martin in the Fields, was supposed to be conducting the San Diego Symphony on Friday, Saturday, and Sunday of this week.

He is not. Sir Neville has been forced to cancel for health reasons. He is 90-years old and his health isn’t what it used to be, so I can understand. That he is still conducting at 90 is incredible.

Neville Marriner has been a favorite of mine since I saw Amadeus in high school. He was the music director for the movie and the Academy of St Martin was the orchestra.

Marriner’s recording of Mozart’s Requiem on Philips was long my favorite recording of not just the Requiem, but of anything. There is no shortage of recordings with Neville Marriner conducting. He has released almost 400 albums as a conductor.

Even though I’m a little sad about Sir Neville, I’m excited about his replacement. Edo de Waart is a world class conductor and has a fairly good number of recordings himself. Born in Amsterdam, De Waart will be conducting a concert of Russian, German, and English music — as if nationality matters.

The program is a good one with Korngold’s Violin Concerto being performed by Alina Pogostkina. The English submission is Elgar’s Nimrod Variations which contains Elgar’s second-best-known tune; the best known being Pomp and Circumstance March No. 1.