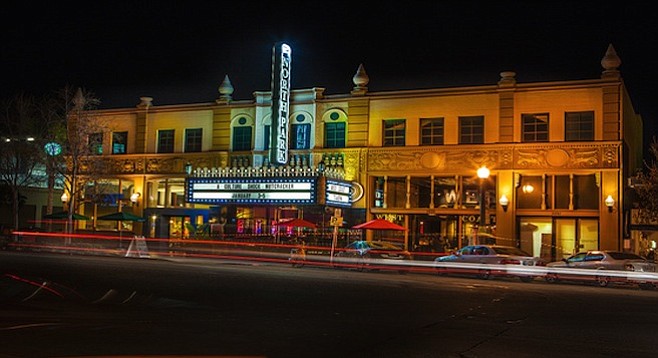 The story of the Observatory’s arrival as one of Orange County’s top music venues started when a computer systems installer named Jon Reiser decided he had grown out of the 300-capacity Detroit Bar, a club he co-owned in Costa Mesa. Reiser left the Detroit Bar and bought the Galaxy Theatre, a run-down 1000-seat venue in Santa Ana, remodeled it, and renamed it the Observatory.

Since opening in 2011, the Observatory succeeded in booking many of the artists who may have otherwise played the House of Blues in Anaheim.

The Observatory’s influence started expanding when its talent-buyer, Jeffrey Shuman, started reaching out by putting shows in the Ventura Theatre and at various venues in Santa Barbara.

It seems the writing was on the marquee.

While North Park owner David Cohen apparently wasn’t too keen on getting the news out, it nevertheless leaked today on the OC Weekly’s website: the Observatory crew was buying the North Park Theatre. A graphic of the venue’s new logo reads “Observatory North Park.”

Casbah co-owner and talent buyer Tim Mays was hired by Cohen to be North Park Theatre’s primary talent buyer. Mays booked most of the shows at North Park in 2014. He did not make it public that he was no longer going to be overseeing the venue’s calendar in 2015. He did, however, cancel some private shows that had been booked at the North Park Theatre in the coming year.

What will it mean to local music fans? Shuman is known for paying headliners top dollar, according to insiders, which may affect ticket prices. On the other hand, the Observatory is known for its occasional $5 shows. KRS-ONE and the Nekromantix both have upcoming shows at the Observatory for a $5 admission.

This comes at an interesting juncture: San Diego House of Blues just brought in a new talent-buyer, Vincent Almeraris from House of Blues Cleveland. The HoB’s talent lineup for January–March seems to be on an uptick.

Calls to Shuman, Mays, and Cohen were not returned.