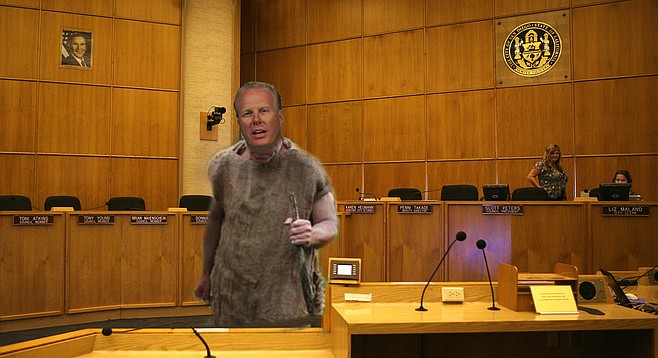 A reading from the Book of Spanos

A disaster of Biblical proportions?

Then the Almighty Dollar came to Spanos a second time: "Go to the great city of San Diego and proclaim to it the message I give you.” Spanos obeyed the word of the Dollar and went to San Diego. Now San Diego was a very small market; it could not even sell out its home games. So, Spanos began by going a day’s journey north to Carson, proclaiming, “One season more and the Chargers will be in this town." The San Diegans believed Spanos. A fast was proclaimed, and all of them, from the greatest to the least, put on sackcloth over their officially licensed NFL jerseys.

When Spanos's warning reached the Mayor of San Diego, he rose from his comfy desk chair, took off his navy blue suit, covered himself with sackcloth and sat down in the dust that used to be the lawns of Balboa Park. This is the proclamation he issued in San Diego: “By the decree of the Mayor: over the last 54 years, the Chargers have been a source of civic pride and inspiration to San Diegans. The people of San Diego are working in good faith to develop a plan that, if approved by the voters, will provide a home for the Chargers for generations to come. San Diego remains fully committed to working with the Chargers to keep the team in their rightful home, San Diego. Let the people give up their lukewarm fannery and their endless yammering about infrastructure. Who knows? Spanos may yet relent and with compassion turn from his fierce greed so that we will not lose our precious, precious football.”

When Spanos saw what the Mayor did and how he turned from his complaint about breaches of good faith, he shrugged and said, "Pony up, or you can bet your sweet butt I'll bring on you the destruction I have threatened."