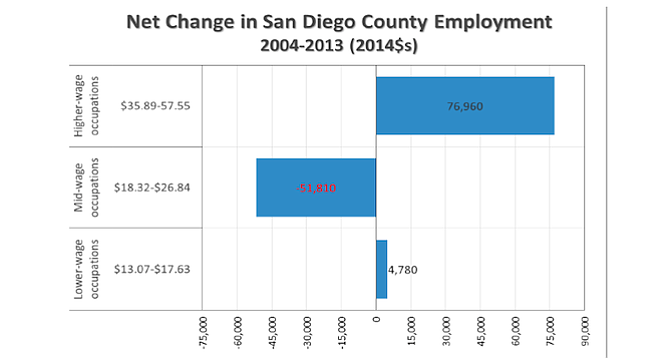 "What we have been failing to do is find strategies that foster job growth in industries that require middle level skills that pay middle class wages," says Erik Bruvold, president of the National University System Institute for Policy Research.

The county has also lost 6000 manufacturing jobs, which feature higher incomes, in the past decade. Low-wage jobs have gone up 4780 while high-wage/high-skill jobs have grown by 77,000. This dynamic illustrates a "hollowing out" of the economy, says Bruvold.

Mark Dresser’s musicianship cuts through it all

“For three months, I existed only on yoga pants and sweatpants.”

"What we have been failing to do is find strategies that foster job growth in industries that require middle level skills that pay middle class wages," says Erik Bruvold, president of the National University System Institute for Policy Research.

The county has also lost 6000 manufacturing jobs, which feature higher incomes, in the past decade. Low-wage jobs have gone up 4780 while high-wage/high-skill jobs have grown by 77,000. This dynamic illustrates a "hollowing out" of the economy, says Bruvold.

Dee-Lish. I mean, an exceptional combo of tastes.
Next Article

A poem for Independence Day by Francis Scott Key

The economy is going to get hollower, when the city authorizes the construction of over 8,000 residential units, where there are currently over 700 businesses and over 7,000 jobs and no residences. This is the plan for Grantville sub-area A. The planning group is going to vote on this tonight. They will vote in favor. How do I know? The group is chaired by a lobbyist for the Building Industry Association. I think another BIA lobbyist is vice chair. This matter will be at the city council in a couple of months, and I am guessing they will vote yes, too.

Brian Peterson: Putting a lobbyist for the Building Industry Association on a planning group is like putting a 30-year veteran of the NFL, and a former Chargers executive, on a so-called task force coming up with a recommendation on a heavily subsidized Chargers stadium. Public pockets are being picked in broad daylight. Best, Don Bauder

Our proximity to Los Angeles has been a crippling deterrent to employment. We have fewer Fortune 500 companies headquartered here than any city of our size (my informal assumption). Our Port Authority seems complacent and we have no significant import/export activity there. Our contracts with military entities isn't up to par. We lost the tuna fleet and canneries that once gave us jobs and exotic appeal.

I once had hope for the local biotech industry but they are still fumbling with ethanol fuels and other technology that isn't needed or useful. Qualcomm may be struggling in the face of Samsung's defection.

What's left? Hotel and restaurant workers. Fast food and Wall-Mart workers. Soon there will be some temporary construction jobs available to those workers who don't demand union wages.

Government is one possibility for a living wage, but the political impetus is to crush benefits, reduce wages and look for private contractors who are willing to do the work for less $$$.

Somebody tell me where the bright spot is in San Diego's employment picture.

swell: You have just described the reason why corporate welfare projects such as a subsidized Chargers stadium get widespread backing. Both the business community and the construction and tourist/leisure labor unions back the subsidies because they want jobs, even though they will not last long.

Having both business and much of the labor movement voting in favor of robbing the taxpayers is a juggernaut that is almost impossible to stop. Best, Don Bauder

Gee an increase in the minimum wage would go along way to lifting all the boats. Too bad the "city fathers" got together and put that off until 2016.

Don Dierinzo: You worked in San Diego at a time the population was often rising 3 percent a year. Labor -- particularly construction industry labor -- was paid well partly because it was NEEDED. Often in those periods, construction workers were in short supply and the companies doing the building had to pay good wages. Best, Don Bauder

Employers and the average citizen of San Diego could care less about middle income jobs. They collectively resent anyone making a decent wage and receiving decent benefits. Most, like the BIA mentioned in the article, are anti union and are against public employees or any employee having a say in the workplace. Home Depot is hiring more people for the spring increase. HD pays $10 an hours with low/no benefits and like many employers hire part time to avoid paying any benefits. An architecturally blighted functionally obsolete 60 year old 2/br 1/ba house is over $400k. Rents are out of control. 2/br 1/ba apartment is $1200 - $1400 a month. Even if "middle income" jobs were created where would the workers live? Some estimates are that it takes an income of $61k to "get by" in San Diego.

AlexClarke: You have put your finger on the most salient point about the San Diego business establishment: greed. You are correct: the business community blocks an increase in the minimum wage but offers no credible solution to the shortage of affordable housing. Best, Don Bauder

Don, as your excellent investigative reporting keeps documenting, America's Finest City died when Oligarch Manchester took over the U-T, the failed Balboa Park Centennial is the most obvious testament of the Decline and Fall of San Diego caused by Pope Doug.

Manchester keeps proving that he is dedicated to magnifying his personal wealth and power regardless of increasingly disastrous consequences to the people and future of San Diego.