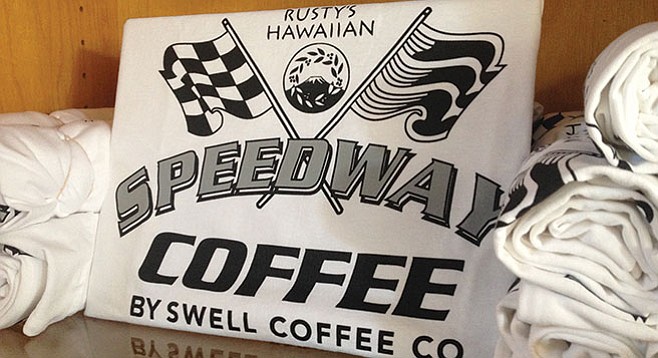 Mission Beach coffee roaster Swell Café has experienced massive growth in the past four months. For one thing, it might no longer be right to call it a Mission Beach roaster. While its original café and roasting location continues to thrive a block from the beach, Swell has set up a production facility in Point Loma, where its 3kg roasting equipment will soon be supplemented by a 35-kilogram Loring roaster.

“It’s over a thousand percent increase in capacity,” says Swell owner John Vallas, who adds, “We have opportunities we’ve had to push back because we need the increase of capacity to be able to fulfill them.”

That said, the company has definitely embraced a number of opportunities, beginning with a second coffee shop and restaurant at the Flower Hill Promenade shopping center in Del Mar. For three decades, the location was a branch of Leucadia roaster Pannikin Coffee. After that closed in spring 2014, the site was briefly known as Café Cantata before Swell took over in August.

Vallas says retail expansion wasn’t slated to be a priority for Swell. “Our primary focus was actually on roasting and developing our coffee program,” he explains, “This as an opportunity was just too good to pass up.”

Swell’s coffee program hasn’t suffered during the expansion. Since head roaster Nel Newbom took over last year, she’s worked to improve the quality of the coffee across the board. As a result, Swell’s Beach Goth espresso blend earned silver at the Compak Golden Bean North America competition, held in Portland, Oregon, in September. Its single-origin Mexico Zaramitla espresso took bronze.

Meanwhile, Newbom’s helped establish several direct-trade partnerships, starting with farms in El Salvador, Guatemala, and Peru. Some are contacts she’s carried over from her ten years as cofounder of Bay Area roaster Barefoot Coffee, but she and Vallas are also traveling to secure new relationships, including recent trips to Mexico, Costa Rica, and Colombia. Newbom estimates 40 percent of Swell’s coffee is now the result of direct-trade agreements, with more to come.

Swell has also seen a surge in coffee-beer collaborations. As sales manager Mondo Rodriguez points out, “Just for beer week alone we had nine beers that had our coffee in them.” These include beers with Mike Hess, Bay City Brewing, Ballast Point, and special releases of AleSmith’s always in-demand Speedway Stout.

For recent special bottle release Hawaiian Speedway, Rodriguez and Newbom worked with AleSmith’s sensory team to identify the right Hawaiian bean for the coconut-infused stout, settling on a Kenya-processed Typica bean from the award-winning Rusty’s Hawaiian farm on the big island. Newbom calls it “A pretty darn good coffee with some really sweet rich chocolate notes, a little bit of coconut, a little tropical fruit.”

With the help of a partnership with the local Patio Group hospitality company, more opportunities for growth lie ahead for Swell. Immediate plans include bottling its cold brew and Hopped Toddy beverage, and selling beans through local grocery chain Krisp.