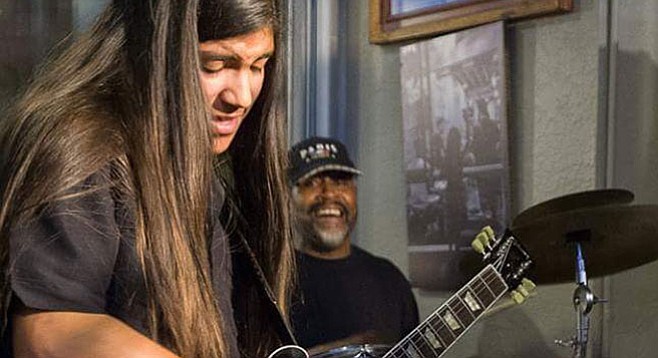 Axe-man Anthony Cullins gets the blues at 14 years young

Sheriff’s deputies have not solved the mystery of who killed Larry Robinson, the guitarist remembered for his decades of local shows and legions of guitar students. He was murdered in a Temecula music store two years ago.

About 150 people showed up this summer at a public square in Fallbrook for a free concert to celebrate his memory. One of the performers at the musical salute was a former student of Robinson, fellow Fallbrook axe-man Anthony Cullins.

"The Thrill Is Gone"

“I was with him for two years. When I was ten he said he couldn’t teach me any more, that I was ahead of the level I should have been at.”

While playing shows at House of Blues, Pala Mesa Resort, Valley Fort Steak House, Temecula Music Festival, and Fallbrook Brewery, the 14-year-old Cullins has acquired the nickname “The Fallbrook Kid” — “Even though I never called myself that.”

While his dad Kenny is there to drive him and give him support, Cullins books his own shows and negotiates his pay including his show on Friday. “They told us they would only pay $200. We settled on $300. You really need to try and get $100 per man every time you play.”

Cullins has recorded an album whose tracks move from Latin-rock to blues to more intricate Joe Satriani–style leads.

Cullins, a freshman at the arts-based Mission Vista High School in Oceanside, aspires is to study at the Berklee College of Music in Boston.

As you might expect there are not many longhairs or rockers at his school.

Regarding his trademark mane, Cullins says is he is unsure if he’s going to cut it again. “I’ve cut it off five times in the past three years. I donate it to Locks of Love, which goes to make wigs for kids with cancer. I’m 50/50 as to whether I’m going to do it again.”

The Anthony Cullins Band plays blues and funk at 8 p.m. on Friday in the Gopher Hole Lounge at Castle Creek Golf Course in Escondido. The show is free and open to all ages.