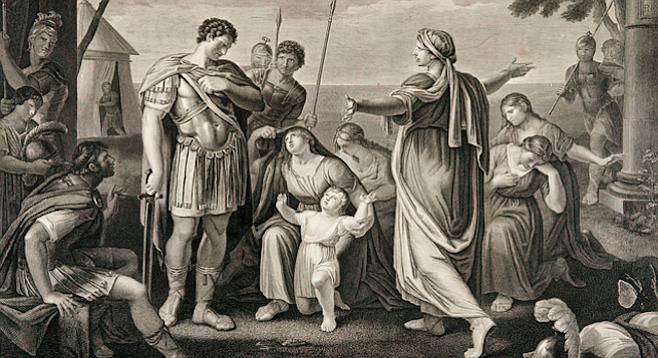 Lost to history but preserved in legend

Beethoven's Coriolan is the esoteric pick of the week

Coriolan was a play by von Collin, but his effort has been somewhat overshadowed because this topic had already been dramatized by this guy named Shakespeare in his play Corialanus.

Coriolan is von Collin’s Germanic take on the ancient story of Gaius Marcius Corialanus. Corialanus hails from about 450 years before the death of Julius Caesar.

Call me an apostate if you wish, but when discussing ancient Rome I think the dating should represent pre- and post-Caesar. Caesar was killed in 44 BC (Before Christ) or 44 BCE (Before the Common Era). (The Chinese would like to know which “common era” we’re talking about.)

All bickering aside, the story of Corialanus is about 2,500 years old. He is lost in history for a couple reasons. A hundred years after Corialanus, the Gauls burned Rome to a crisp, destroying any records that may have existed. The sources that Shakespeare and von Collin used were from Livy and Plutarch, who recorded the story 500 and 600 years after it happened.

In addition to that, the fifth century was the Golden Era of Athens. Rome was an unknown entity to most of the world outside central Italy. Fifth century Athens was all about names such as Pericles, Socrates, Plato, Sophocles, Euripides, and Herodotus. The Rome of Corialanus was not a player on the world stage at that time. The Roman Republic itself was only about 15 years old.

The fate of Corialanus is unknown. The general story is that he was a Roman hero and elitist who was forced into exile, joined the enemy, and led them back to defeat Rome and exact his revenge on the populists. This elitist-versus-populist or patrician-versus-plebeian issue would eventually destroy the Republic.

I don’t want to sound alarmist, but we’ve got something of the same issue going on in our Republic. The patricians or “elite” kept making laws that served to enrich themselves to the detriment of the people. Sound familiar?

When Corialanus arrived Rome had no defenses left and was wide open to attack. The women of the city issued forth, led by Corialanus’s mother and wife. After this non-violent intervention Corialanus retreated and Rome was saved, but it is not known how he ended historically.