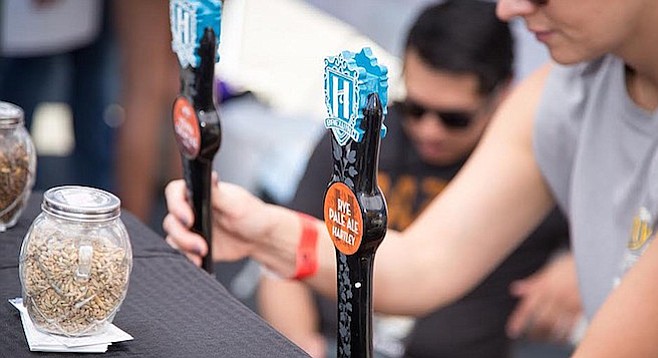 SD belches out the beer jobs and revenue

Often lost in the discussion about how many beer producers call San Diego County home these days is the impact on the economy — and particularly on local employment. According to the City of San Diego's Economic Development Department, for every employee hired by a production brewery, 4.7 additional jobs are indirectly created down the distribution line. That 5.7 multiplier reflects additional jobs ranging from delivery driver to beertender and general job growth spurred by the boost to the economy.

And the boost is huge. In figures announced this spring by the National University System Institute for Policy Research, local beer made a $600 million impact in 2014. To put it into context, Comic-Con, jewel in the cap of the convention center, is estimated to have added $488 million over the past three years combined.

More than a dozen breweries have opened this year. Vince Vasquez, author of the 2014 study, says, “With the incredible growth we continue to experience, I would suspect another big year of industry job creation.” Meaning we can expect a significant increase to the 6203 jobs reported in the study.

Reflecting this growth is the launch of San Diego's first Craft Beer Job Fair. Hosted by the San Diego Brewers Guild, the job fair is scheduled for Tuesday, August 25th, from 4-7 p.m. at the outdoor events space SILO in Makers Quarter. Stone, AleSmith, and Ballast Point will be on site looking for job candidates, as will smaller companies such as Prohibition and Amplified Ale Works; nonlocal companies Sierra Nevada and Groundswell; and industry-adjacent companies such as Knotty Barrel, Hoppy Yoga, and Taphunter.

Brewers Guild president Kevin Hopkins says he expects more than 500 job seekers to attend the fair and interact with a growing list of 16-plus hiring companies. "We're not just looking for brewery production employees," he says, "We're looking for people across multiple disciplines: hospitality, sales, production, operations, marketing, accounting. You name it, a craft brewery probably needs it. And if they don't need it today they probably need it soon."

Hopkins represents Mother Earth Brew Co., where he says dozens of job-seekers inquire about work every week. He suggests the job fair is not strictly about finding warm bodies but about efficiently accessing qualified candidates. "All of our breweries are looking for high-quality, high-caliber people," he says. "A love and passion for craft is paramount," and "Anybody who's worked in the hospitality industry would be a strong candidate."

The free event is the first of what may turn out to be many.

"It wouldn't surprise me if we wind up doing this more than once per year," Hopkins says.

So...maybe we should expand local breweries and leave the convention center alone?

Great opportunity for folks happy to be making minimum wage. You can participate in the manufacture and sales of the must destructive and addictive drug on earth, alcohol. San Diego leadership should be ashamed to promote the consumption of alcohol, but typically only looks at tax revenues when determining what's best for our city.