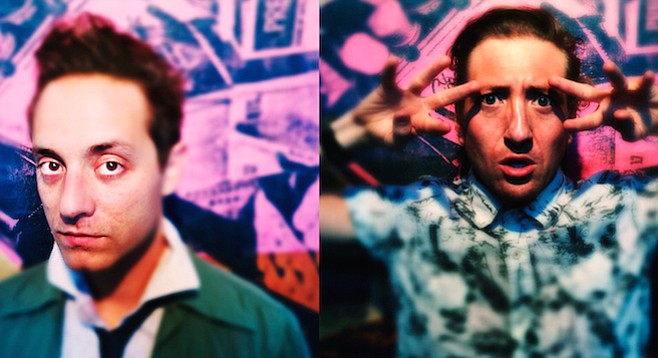 Echo Park Social Club breaks through with an Aloha song

Radio doesn’t have the make-or-break power it held from the 1950s until MP3s arrived in the late ’90s. Still, nothing jumpstarts a career like a Top 40 hit.

But in order to get on the radio you need the support of a major-label promotion machine and/or the push of well-connected radio promoters. Echo Park Social Club just blew up that system.

The four-man band cracked the airplay code by getting their song played on an alternative station in the iHeartRadio/Clear Channel radio chain. And they did it without a manager or label.

“We sent them an MP3 and they started playing it,” says Echo Park guitarist Peter Simon.

That song, “Let’s Say Aloha,” is an infectious pop tune that (like a Beach Boys classic) paints a paradise image using harmonies and references to beaches and huarache sandals.

“We sent an email in April to the program director of Star 101.9 in Honolulu,” Simon tells the Reader. “We just thought it was a good idea to send an ‘Aloha’ song to a Hawaiian station. It’s not rocket science. Months went by and we didn’t hear anything until he contacted us on our facebook asking for a high-resolution copy so he could play it on the radio.”

“Let’s Say Aloha” has taken off in Oahu, where it gets played once every four hours. “It’s No. 17 this week on their chart and going up. They play us between Mumford and Sons and Florence and the Machine.”

Formerly known as Hampton Beats, Simon says the band slogged along for a couple years playing by the rock-band play book.

“Everyone thinks they have to hide behind this stupid band setup of drums, bass, and guitar,” says Simon. “It’s like high school where no one wants to step outside of the box and be judged. We finally discovered we could implode that formula. We axed the drummer from the equation, and went back in the studio and built a new sound based around guitar parts and harmonies. To us it’s all about the songwriting. Our music is more akin to the pop of the ’50s and ’60s.”

“For instance, nobody cares if Milky Chance is playing without drums or bass. They are two dudes, one with an acoustic guitar and another with a computer, who realize it all comes down to a good song.”