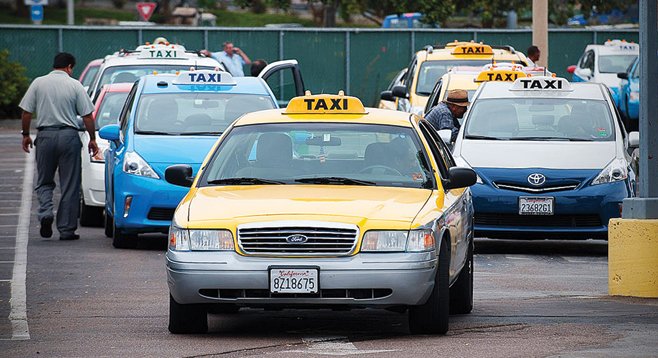 On Tuesday, April 28, a judge in San Diego Superior Court was not swayed by lawyers hired by the city's taxicab industry, who sought an injunction to stop Metropolitan Transit System from permitting more taxis to operate on San Diego's streets.

The city council voted 8-1 last year to lift the cap on taxi permits, currently set at just under 1000. The decision was met with outrage by current permit holders, some of whom have paid up to $160,000 to acquire the scarce permits through a legally murky gray market. Issued by MTS under a management contract with a city, the operating licenses have a face value of $3000.

In March, the San Diego Transportation Association, which represents the existing taxi owners, filed suit against MTS. Their arguments hinge on alleged violations of the California Environmental Quality Act, which could require a report studying the environmental impact of permitting an unlimited number of cabs to operate on local roads.

The association has said that as many as 5000 cabs could hit the streets if the new permits start flowing. Advocates for the change say there are closer to 1000 new applications, many from drivers who currently rent their vehicles from owners for up to $700 per week.

On Tuesday, judge Ronald Prager heard a request from association lawyers to issue an injunction that sought to block MTS from continuing to process new applications, though no permits have been issued. Prager said he was "highly skeptical" of the permit owners' intent.

"I question whether they're really motivated by environmental concerns, or if they're using this as a means to throw a wrench into the application process," Prager told lawyers representing the association, MTS, and the City of San Diego. "If someone wanted to argue this on [Environmental Quality Act] grounds, they should have done it at the city-council meeting,” which was highly attended and included hours of testimony from both sides.

The environmental issue was not raised before the city-council vote.

"I'm not sure that increasing the number of low-to-no-emission taxicabs on the road isn't going to be positive [for the environment]," Prager continued.

On Wednesday morning, April 29, Prager declined the injunction request, so the permitting process will move forward. The case, meanwhile, will continue to trial, as will a claim of "inverse condemnation," wherein the owners seek a $12 million payout over losses from the opening of the marketplace and devaluation of the inflated permit prices.

Taxi owners want compensation for their speculation in medallions? The taxi owners will soon find out that the lawyers have taken them to the cleaners too.

Some of these taxi owners are individual drivers who saved or borrowed to get these medallions. Combined with Uber and Lyft essentially ignoring the need for a medallion, the whole industry is now in confusion. I urge the City to study the policies of successful cab cities, New York and Chicago, London and Sydney for example, where cabs are easy to find and comparatively cheap.