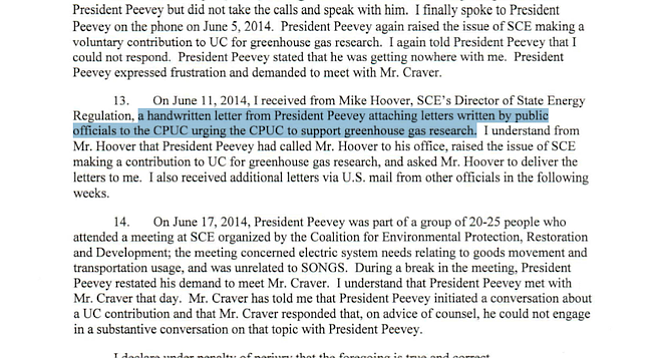 The San Onofre–related documents that Southern California Edison turned over to the California Public Utilities Commission yesterday (April 29) are all one needs to know about the company's credibility.

The commission is supposed to turn over the documents to San Diego attorneys Mike Aguirre and Maria Severson, who sued to get them because of Edison's foot-dragging in providing them.

In the documents, Edison asserts that then–commission president Michael Peevey's communications did not influence the "settlement" — the so-called compromise in which ratepayers will get stuck paying 70 percent of the cleanup cost related to the closing of the San Onofre nuclear facility.

This started when Peevey had a secret meeting in Poland with Edison executive Stephen Pickett on November 30, 2013. Although Peevey sketched out a framework for what I call the Rape of the Ratepayers, Edison insists it didn't follow his suggestions.

It's important to realize that Peevey has bachelor's and master's degrees from the University of California Berkeley and is a former president of Southern California Edison. 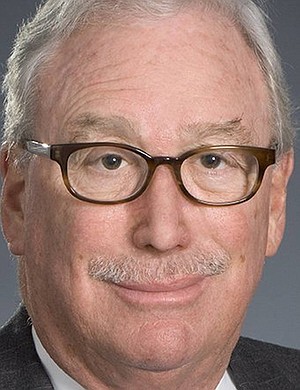 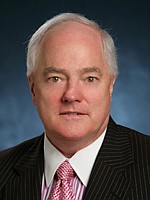 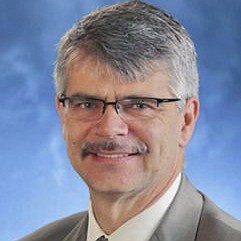 On May 2, 2014, Ron Litzinger, then president of Edison, had a meeting with Peevey and another executive. Peevey asked Edison "to make a voluntary contribution to the University of California...for greenhouse gas research...the contribution should total $25 million over five years, with $4 million a year coming from [Edison] and $1 million a year coming from SDG&E," says Litzinger in his April 29 declaration under oath.

On May 14, 2014, Peevey met with Litzinger and another commissioner. "Peevey raised the issue of [Edison] making a contribution to [the University of California] for greenhouse gas research. Mr. Litzinger stated he could not engage in a substantive conversation on that topic," says Edison in its declaration.

On May 28, Mike Hoover, another top Edison executive, met with Peevey. "The communication was initiated by President Peevey, who noted that he was not pleased with [Edison's] hesitance to contribute economic support to a California Center for Sustainable Communities at [the University of California Los Angeles] as part of the [San Onofre] settlement," writes Edison in its declaration released yesterday. (Early conversations were about the UC money going to UCLA.)

On June 5, writes Edison, "President Peevey called Ron Litzinger and again raised the issue of [Edison] making a voluntary contribution to UC for greenhouse gas research. Mr. Litzinger again told President Peevey that he could not respond. President Peevey expressed frustration and demanded to meet with Ted Craver." (Craver was, and is, the big enchilada: he is chief executive of Edison International, the parent of Southern California Edison.)

On June 11, writes Edison, "President Peevey called Mike Hoover to his office, raised the issue of [Edison] making a contribution to UC for greenhouse gas research, and asked Mr. Hoover to deliver to Ron Litzinger a handwritten letter from President Peevey attaching letters to the CPUC written by several public officials urging the CPUC to support greenhouse gas research."

On June 17, writes Edison, "President Peevey initiated a meeting with Ted Craver. President Peevey raised the issue of [Edison] making a voluntary contribution to UC for greenhouse gas research. Mr. Craver responded that he could not engage in a substantive conversation on that topic with President Peevey."

On June 18, writes Edison, "President Peevey called Ron Olson, an attorney at Munger, Tolles & Olson and former member of the boards of [Edison] and Edison International, raised the issue of a UC contribution. Mr. Olson responded that [Edison] could not engage in a substantive conversation on the topic with President Peevey."

That was a lot of turndowns. Sounds like me, decades ago, trying to get a date with the prettiest girl in school. (But even I would have taken a hint and quit after a few tries.)

On September 24, a group of four institutions, including Edison, filed its recommendation for the settlement in which ratepayers would pick up 70 percent of the San Onofre tab. On page 57 is this revealing condition of the deal: the University of California, at a now undetermined location, will get $5 million annually for five years for greenhouse gas research. Edison will pay $4 million a year and SDG&E $1 million annually.

Why is it that my mind keeps showing me Peevey as Fagin from the musical version of "Oliver Twist"?

Maybe because the lyrics of "Got to pick a pocket or two" are just so very apropos. Matter of fact, Picker and Peevey could go on the road as confidence men with the best of them.

Jerry Brown's best idea has been the $10,000 fine for those who waste water. What about those who lie, cheat, steal and then lie some more?

Or maybe "Professor" Harold Hill from "The Music Man."

I think it is the image of the open-fingered gloves that seals Peevey as Fagin for me. He's already got the creepy smile. (San Francisco used to have "Beach Blanket Babylon". Maybe it is time for a redo.)

eastlaker: Would Fagin have been as overt as Peevey, and as Edison? I am not sure. Best, Don Bauder

Fagin did teach his tricks of the trade to an entire generation of pickpockets. It is starting to look like that is exactly what Peevey did at the CPUC.

eastlaker: It certainly looks more and more that he gave his successor, Picker, a thorough education. Best, Don Bauder

dwbat: In the case of "Professor" Harold Hill, the librarian did some homework and had him pegged. One wonders if Edison figures that it has the case rigged anyway, so any judge will look the other way. Best, Don Bauder

eastlaker: What is eye-opening -- astonishing, really -- is how blatant this is. For example, Edison makes a handful of main points that merit a headline. One of them reads, "President Peevey's Communications Did Not Influence the Settlement."

Then you continue reading. Here is Peevey talking with one after another Edison executive, and with each one pushing for the $25 million greenhouse gas research grant to the University of California. Sure enough, at the end, he gets EXACTLY what he asked for -- $4 million a year from Edison, $1 million a year from SDG&E for research at a UCal institution. And Peevey didn't influence the settlement?

Putting this blatant contradiction right out in the open makes one wonder not just about the dishonesty that permeates this company, but perhaps the stupidity. Did Edison think no one would read the document? Best, Don Bauder

more like a serial killer who will tell where all the bodies are buried ( rat out his accomplices ) to get a better deal.

Murphyjunk: Other than paid Mafioso hit men, I don't know that I can recall a serial killer who had accomplices. Best, Don Bauder

Murphyjunk: Right you are. How could I have missed that? Best, Don Bauder

An incredible $25 million for greenhouse gas research to UC from Edison and SDG&E in return for sticking ratepayers -- not stockholders -- with the cost for shutting down malfunctioning nuclear San Onofre. This outrageous deal happened on the watch of politically adroit UC President Janet Napolitano.

monaghan: Yes, Napolitano became president of the University of California in September of 2013, so she was there when Peevey was pushing for the $25 million. However, I don't think the operation is functional yet, so she might not deserve any of the blame. Best, Don Bauder

Charles Langley: I think it is pretty clear that Peevey sketched the framework for the rape of the ratepayers at the clandestine meeting in Warsaw, Poland. Then Commissioner Florio tweaked the framework slightly, to make it look like the framework was independent work of the four parties to the settlement. But it should fool no one. Peevey dictated those terms. In the end, Peevey got what he wanted.

Mark Donn: If you refuse to pay, your power could be shut off. Best, Don Bauder

they are waiting for the ink to dry on the freshly generated "documents' before they turn them over.

Murphyjunk: Your analysis may be right on the money. Best, Don Bauder

And they are buying white-out by the gallon! 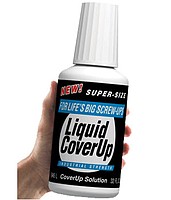 dwbat: Yes, and ratepayers will pay 100 percent of the bill for the white-out. Best, Don Bauder

maybe the fumes will get to them.

Believe it or not, I remember high school. The upper-crust creeps turned out at reunions to look like the mug shots that I'm so grateful to you and the Reader for publishing . . . I guess if you're born under a rock, you're stuck with living under one . . . The poor bastards! (Progeny of the milk-man, the pool-boy, and the famiglia tax accountant, just to name a few . . .? Those poor dumb-blonde trophies . . . now duck-billed platypussies--R.I.P.)

About that grant going to someone somewhere in the UC system...do you think there are predetermined "findings" about greenhouse gases, or do you think it is legitimate research? Of course, it's bad enough Peevey was trying to buy this off at all.

eastlaker: The final document had the UCal system getting the $25 million -- $4 million annually from Edison, $1 million from SDG&E for greenhouse gas research.

I understand UCal is getting a little nervous about this. It doesn't like the attention this is getting in the media. Also, the CPUC is getting nervous, too, and may take another look at the settlement. It's not clear where the money will go in the end. Best, Don Bauder

Does Peevey own stock in utility companies? His retirement accounts would increase in value by saving utility shareholders 3.5 billon dollars.

Diogenes: As a CPUC commissioner, he should not own shares in any utility that he and the commission regulate. After he left under duress as Edison's president, he accumulated a lot of money in smaller companies.

There is such a thing as offshore secrecy and tax havens. I don't know that Peevey utilizes them, but I try not to say that any person definitely does NOT have shares in a company. How do you know? Best, Don Bauder

Aguirre can ask Peevey in his deposition about his possible motives.

Diogenes: Will this get to the deposition stage? The utilities, CPUC, and others in government are desperately trying to bury this.

If the coverup works, and nothing is done about a thoroughly corrupt government agency, then I think it will be time for a huge consumer boycott -- possibly refusing to pay bills. Best, Don Bauder

Mike Murphy: This is one of the major points of this case. Ratepayers will pick up 70 percent of the nearly $5 billion decommissioning costs, but ratepayers didn't get any electricity. So ratepayers are charged for electricity they never got. The profits of Edison's parent, Edison International, will go up if the deal goes through. Best, Don Bauder