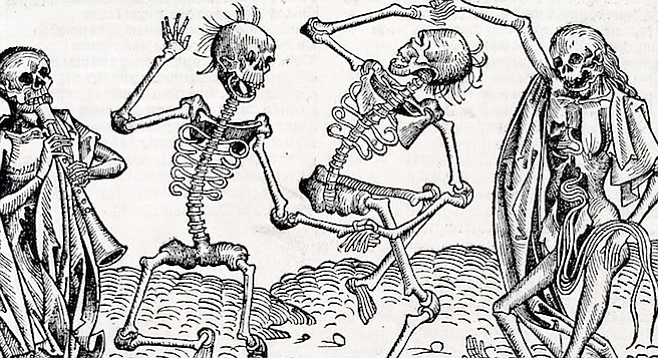 History, culture, and the Dance of Death

"You might be a king or a little street sweeper, but sooner or later you dance with the reaper." — Bill and Ted's Bogus Journey

On February 14, 1942, the Royal Air Force received authorization to bomb the civilian population of Germany. Lubeck, Germany was the first city to be bombed for its cultural value rather than its military or industrial presence.

In the ensuing firestorm the famous Lubecker Totentanz by Bernt Notke was destroyed. The German response was an unsuccessful attempt to destroy English cultural centers such as Bath and Canterbury.

Created in 1463, the Lubecker Totentanz was a masterful rendition of a traditional medieval artform. In the Totentanz, or Dance of Death, a skeletal figure — Death — is portrayed next to different members of society. The Pope, as the peak of the medieval caste system, was the first to dance with Death and then Death would be seen with a king, a merchant, a cleric, a peasant, a maiden, and so forth.

Each depiction would bear a caption in which Death and the different characters have a brief exchange. By and large, Death’s text with the mighty was critical. Here is the statement to the king:

“All your thoughts you had turned to worldly splendour. What's the use? You must into the earth and be shaped like me. Justice turned and twisted have you let reign under you, showing the poor no pity!”

Thomas Adès has composed a setting of the Lubecker Totentanz. This piece of music is noteworthy because while there have been several instrumental renderings of the Dance of Death, this is the first, to my knowledge, that sets the Death captions extensively. This is also a rare piece of new music because it exceeds half an hour. That may sound insignificant but most new pieces of orchestral music are less than 30 minutes in length.

A baritone solo sings the text for Death while a soprano soloist sings for the different figures. I found it to be a fascinating idea for a composition. There is a rich vein of culture and history woven together if we follow the trail. Simply exploring the Lubecker Totentanz itself is fascinating, with its critique of medieval society, its symbolic destruction by the British, and now it has come full circle by being promoted by a British composer and premiered at Royal Albert Hall in London.