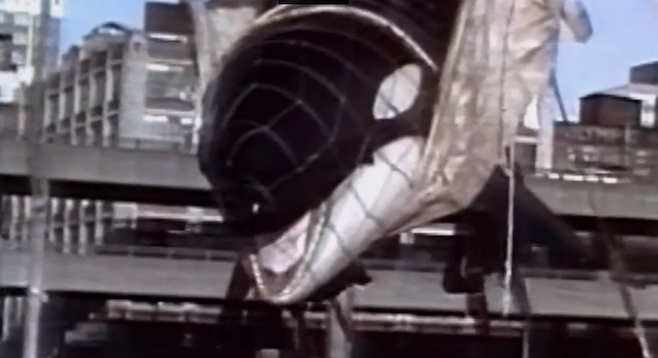 SeaWorld's leased land is their land

"[A] further step toward the ability of corporations to privatize public parks."

The public has no right to stage protests on park land leased to SeaWorld in Mission Bay, an appellate court ruled last week. A lawyer representing a handful of protesters is calling the judgment “one further step toward the ability of corporations to privatize public parks.”

San Diego Animal Advocates and plaintiff Alfredo Kuba staged a protest in the parking lot and near the front gates of the park in 2007, handing out leaflets decrying the treatment of marine animals in the park. They were approached by SeaWorld's private security personnel, who informed the activists that they were on private property before demanding they leave; they threatened to have their cars towed if they didn't comply.

"Established law has always held that public sidewalks and public parks are traditional public forums," said Kuba's attorney Corey Evans to Courthouse News Service, explaining the group's position that because the park sits entirely on public park land leased from the City of San Diego they should be entitled to exercise their rights to free speech.

Judge Judith McConnell disagreed, noting that the amusement park had constructed the parking lot and sidewalks on its own, without ever intending the area to serve as a gathering place for a public forum. "No trespassing" signs are also prominently displayed throughout the grounds.

Evidence of a conceptual path to run through the site decades ago wasn't considered strong enough to convince the court that the non-ticketed access portion of the grounds were ever intended as a point of public access.

"It's a Catch-22," Evans explained to Courthouse News. "The court is saying for the sidewalk to be a public forum, it must already be open for public disclosure. But obviously, if it were open for public discourse, no one would be filing suit to prove it's a public forum. The court is basically saying that since SeaWorld has prevented people from engaging in free speech on this public sidewalk, then it shows it is not open for free speech."

The ruling could have implications for a similar case in San Diego Federal Court, where SeaWorld brought in police to force protesters to disperse under threat of arrest. That case has been on hold while a judge awaits the outcome of Kuba's.

Protesters have continued to gather periodically at SeaWorld, though they now do so outside the main parking lot entrance, beyond the reach of the amusement park's security.

This really isn't a surprise. Leasing property generally allows the lessee to have all the rights of the owner as to the use of the property during the period of the lease. The fact that the city has designated the area as parkland, really doesn't figure into the decision. Having said that, I was very surprised to hear that Judith McConnell is still a judge, and worse yet, that she's not on the appellate court. Some years ago she made a few absolutely awful rulings, and I"d thought she was just a bad memory. When will she retire and ride off into the sunset?

Meant to say that "she's on the appellate court." The word not doesn't belong there.