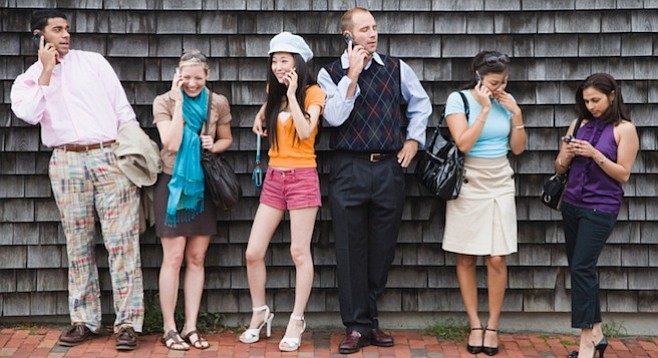 Everyone's got a smartphone nowadays… Huh? I said, EVERYONE HAS A SMARTPHONE!

Qualcomm yesterday (April 22) predicted weaker-than-expected revenue and earnings for its third quarter. The chip-maker said its third quarter net income will be 67 cents to 82 cents a share on sales of $5.4 billion to $6.2 billion

Analysts had been expecting 99 cents a share earnings on sales of $6.46 billion, according to Bloomberg News. This was a big disappointment for Wall Street, and at 7 p.m. , Qualcomm, which sharply lowered its forecast for its business the rest of this year, was down 3 percent to $66.87.

For the full year, Qualcomm predicted revenues would come in at $25 billion to $27 billion. Earlier, it had forecast $26.3 billion to $28 billion.

For the second quarter, earnings per share plunged 46 percent to 63 cents, but beat analysts' expectations.

Everyone's got a smartphone nowadays… Huh? I said, EVERYONE HAS A SMARTPHONE!

Qualcomm yesterday (April 22) predicted weaker-than-expected revenue and earnings for its third quarter. The chip-maker said its third quarter net income will be 67 cents to 82 cents a share on sales of $5.4 billion to $6.2 billion

Analysts had been expecting 99 cents a share earnings on sales of $6.46 billion, according to Bloomberg News. This was a big disappointment for Wall Street, and at 7 p.m. , Qualcomm, which sharply lowered its forecast for its business the rest of this year, was down 3 percent to $66.87.

For the full year, Qualcomm predicted revenues would come in at $25 billion to $27 billion. Earlier, it had forecast $26.3 billion to $28 billion.

For the second quarter, earnings per share plunged 46 percent to 63 cents, but beat analysts' expectations.

A Home for the Homeless

California solves crisis by offering “a different kind of asylum.”

I don't think smartphones are a "fad"; they will be around for a long time. But it's just so competitive now that cellphone brands come and go. The Blackberry and Motorola flip phones were once high and mighty. Now they're not. And more companies have entered the marketplace. Even computer giant Acer is making a smartphone now (Windows-based, and sold in Microsoft stores). I know next to nothing about Wall Street, but I think their "analysts" sometimes have their heads up their butts. A small drop in revenues and profits doesn't necessarily spell doom for these companies. The smart ones adapt and move into other product areas, so I believe Qualcomm will be OK. Novatel Wireless, J.C. Penney and Sears Holdings are in a lot more trouble than Qualcomm.

dwbat: Smartphones will be around for a long, long time, but as of now, Qualcomm has lost market share in its corner of the business. Best, Don Bauder

don bauder, Please correct me if I am wrong, but doesn't the Reader create the headlines for the articles?

danfogel: Yes. This one was probably written in haste. Best, Don Bauder

Don doesn't usually create the headlines for his stories, this one included. This headline in particular is sarcasm. Of course Qualcomm can't blame their lower-than-expected earnings on a dying fad. The truth seems to be that their chip-making competitors are acquiring more market share. Sorry for the confusion.

Robert Mizrachi: I was going to protect your name. You need not do a mea culpa. Sarcasm sometimes doesn't register with many readers, as I have found out in a lifetime of composition. Best, Don Bauder

As long as Qualcomm can produce cutting edge software and hardware they will be viable. You can say that about any tech company, of course. If you are an investor there is no way to know if they can produce miracles, no way to predict future performance. You want to know if they have employees who are capable of producing miracles. Google has such people. Apple has. Does Qualcomm???

swell: Qualcomm is a very good company that has run into troubles -- a fat payment to China, losing some chip business. However, Qualcomm can't match Apple -- but then, few if any companies can. (Full disclosure: our oldest son has been an Apple software engineer for 23 years. I am not basing my statement on Apple on anything he tells us, because he can't tell us anything.) Best, Don Bauder

Apple is famous for their secrecy. Supposedly Apple employees even have to sign non-disclosure agreements (NDA's) with other Apple employees anytime information is exchanged within the company (very unusual practice)

ImJustABill: Our son is so secretive about his company that he hasn't told us he has had to sign a non-disclosure agreement. Best, Don Bauder

Supposedly QCOM's had some problems with recent chips delivered for Samsung phones. Samsung is fully integrated now - they make phones AND design chips AND even have the semiconductor foundaries to fabricate chips (QCOM is a "fabless" semiconductor chip and must rely on TSMC - or perhaps Samsung - to make their cutting edge chips).

In the high-end application processor space QCOM faces tough competition from Mediatek, as well as from Apple and Samsung who also make their own AP's.

There have been ongoing legal battles over QCOM's licensing practices.

ImJustABill: I'm not sure what you mean by "problems" with recent chips delivered to Samsung. Best, Don Bauder

There were rumors of overheating problems with snapdragon chips for S6 http://www.theinquirer.net/inquirer/news/2391263/samsung-to-ditch-qualcomm-snapdragon-chip-in-galaxy-s6-smartphone

ImJustABill: The rumors might be true, as some rumors often are. If Samsung will use its own chips, that would be a saving for it -- unless the product quality declines. Best, Don Bauder

I don't think the smartphone fad is going anywhere soon but maybe existing models have already gotten powerful enough for many users. But the trend has certainly been that with more data bandwidth someone will find a use for it.

ImJustABill: I don't think smartphones can be called a fad. Your list of emerging chip markets is an inclusive one. Best, Don Bauder

I was just using the "fad" reference from the headline (regardless of whether or not "fad" is an accurate title or who wrote the headline!)

So I think this question has come up before, when Qualcomm performs a RIF (reduction in force) to cut costs or "right-size" their staff, do they let the H-1B visa workers go first? Or do they keep the H-1B workers (they lobby so hard to bring over in increasing numbers) and let the Americans hit the bricks.

Ponzi: I don't know the protocol for letting an H-1B worker go. My guess is that H-1Bs would go last. They come cheap. Best, Don Bauder

I don't know the protocol either but clearly the H1-B laws protecting American workers are fairly weak so I doubt there are many requirements concerning layoffs - unless the replacement of American workers with H1-B workers is as blatant as the SCE case.

I suspect QCOM lays off whichever employees they feel are the least cost effective.

ImJustABill: The Southern California Edison (SCE) case is indeed blatant and is getting media coverage around the country. This comes at the time Edison is being exposed for its cozy and totally inappropriate relationship with the California Public Utilities Commission. Best, Don Bauder

people will always want new toys. the hard part is creating something new to feed their instant gratification

Murphyjunk: A large part of this industry is based on consumers wanting toys, and also wanting to be the first in the neighborhood to have the toys. Best, Don Bauder

dwbat: Apple will keep you guessing right up until the release. Best, Don Bauder

Well, not always. Their upcoming watch had been talked about for months.

dwbat: I don't know whether Apple itself was talking about the watch. But you are right: it got oodles of publicity before it was ever announced. Best, Don Bauder

I seem to remember that Tim Cook unveiled the Apple watch at the same "live event" last September when he announced the iPhone 6 and 6 Plus. So that makes it roughly 7 months from announcement to release. But before that there was months and months of rumors and speculation, including the fact Apple was granted a patent for a “wrist-worn electronic device" months earlier and an Apple patent for a “bi-stable spring with flexible display” that was from sometime early in 2013. The first "rumors" I heard were around that time.

danfogel: I have no idea how much of that pre-announcement publicity was generated by Apple. If Cook unveiled the watch in September, there was obviously a long lag between his mention and the product coming out. Best, Don Bauder

interesting, I bought a smart watch ( phone, video camera. internet) in Hong Kong over 3 years ago. ( and under $60)

Murphyjunk: How smart is the smart watch you bought in Hong Kong three years ago for less than $3? Best, Don Bauder

Its a good phone, takes a sim card, so will work on any system, not stuck to just one like iphones. and battery is easy to change.

Murphyjunk: All that for 60 bucks? Wow. And you bought it three years ago. Best, Don Bauder

shows that apple is not the first, just the one with the most hype

Murphyjunk: Not just the most hype, in my judgment. Apple's products cost more and, I am told, are worth it. Best, Don Bauder

That rumor has been mentioned in some articles/blogs. Could be true, could be wild speculation.

ImJustABill: Yes, that rumor is racing around. Best, Don Bauder

I couldn't afford an Apple/Tesla iCar. Could they also offer an iPogoStick for people on a tight budget?

dwbat: Send the idea to Cook. You might get a finder's fee. Best, Don Bauder

ImJustABill: That is a possibility, too. Best, Don Bauder

when Ipads were first on the market, I think it was Jay Leno that thought they were a feminine hygiene product.

Literally when I told my dad that my wife had an iPad he was concerned "What's wrong with her eye? Why does she need an eye pad?"

ImJustABill: That goes to show how far out of it we old folks are. Best, Don Bauder

Murphyjunk: He thought that until he saw the price. Best, Don Bauder

and just the price was padded

ImJustABill: When the executives in Rochester, New York, were naming their new product, there was controversy whether Xerox wouldbe confused with Xrox, or XLax. Best, Don Bauder

But the laxative isn't called "XLax"; it is ex-lax. http://ex-lax.com/

dwbat: Spelling made no difference in this case. Those who came up with the name Xerox were concerned, from a marketing perspective, that Xerox was too close to the name of the constipation product. Best, Don Bauder

all this is giving me a headache , I need to take some dammatital.

Murphyjunk: This is a family newspaper. Can't you take some darnital instead? Best, Don Bauder

According to wikipedia, the name was created by coining the term Xerography from two Greek roots meaning "dry writing." It says nothing about worrying over confusion with ex-lax. [And the spelling WOULD have made a difference, since Xerox doesn't use an "ex" at the beginning.] What is your source?