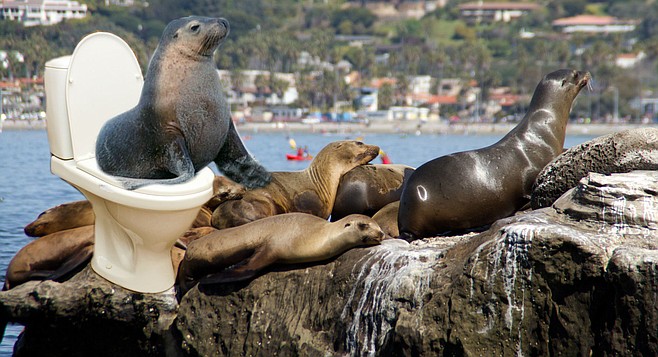 "When SeaWorld was called upon to rescue over 650 marine mammals from Southern California beaches this year — including over 400 sea lions, far more than ever before — the facility's team of skilled trainers recognized a chance to turn a problem into a solution. For years now, La Jolla residents have complained about the stench created by sea lion waste caked on the rocks surrounding La Jolla Cove.

"We employed our world-famous animal training techniques to teach our rescued sea lions how to properly use a flush toilet, and we are hoping that they, in turn, will teach their wild counterparts. It's unprecedented, but SeaWorld has long prided itself on doing what's never been done before. It's just one more way we're working to bring humans and marine life closer together."

Nice trick. Better than balancing balls on their nose.