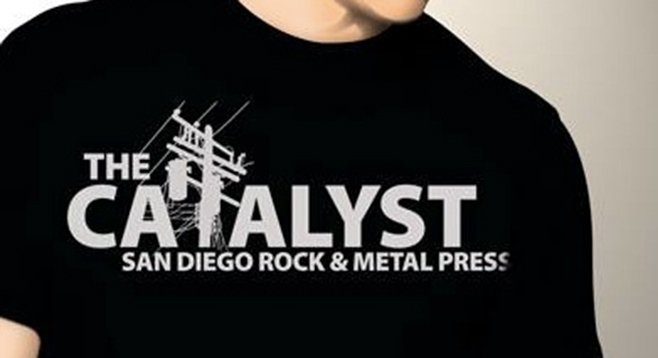 “The reaction has, by and large, been great.” Clay Hackett checks in with the Reader to talk about his newest creation, the Catalyst. “The Catalyst is an online magazine that covers [San Diego] rock and metal, all the way to the county limits so nobody gets left out.” Seven months ago, the ex–Suicide Chords drummer began laying the foundation for the e-zine. The concept generated what Hackett considers a strong Facebook presence of over 1000 “likes” since he went public on social media with his intentions. “Any day now,” is what he says when asked about the e-zine’s official launch date. He scrolls through some demo pages on his tablet and points out that he’s already attracted some paying advertisers.

“It’s been a positive response, but the metal community, in particular, was cautious at first...until they understood that we’re here for the good of everybody in the scene.”

Add to the list the cautious Alice Stinnett, Hackett says. Stinnett is the new general manager at Brick by Brick, a hard-rock nightclub in Bay Park that recently reopened after shuttering for a few months. “It was the night of the Symbolic-Seventrain show,” says Hackett. “I had four Catalyst people there. Photographer Scott Clift was going to take photos, and Jason Leonard was going to write a thousand-word feature about the club. He was geared up to write a really positive story, in consideration of all the negative press the Brick had gotten in the recent past.”

But when Hackett moved to introduce himself to Stinnett her reaction surprised him. “She just stared at me. She didn’t smile. She didn’t even say hello. She just stared at me. It felt like an eternity, but it probably only lasted five seconds.” Hackett says he excused himself. “I didn’t make a big deal out of it. But then Jason came to me a little later and asked if we could talk. ‘I’m not doing this article,’ he said. He said Alice was the most unprofessional person he’d come across.” Jason Leonard, too, had gotten the cold shoulder. “The bottom line?” Hackett says. “We didn’t do a story on the place. This is the kind of old stuff that used to plague our scene.”

Hackett says he tried to think back to a time when he might have offended Stinnett. “Nothing came to mind. The Catalyst has been solid proponents of the club’s reopening, and when my new band Mursic played there, everything was fine.” Is the Catalyst-Brick beef terminal? No, Hackett says. “If she makes good with us, we’d be okay. I understand. Everybody has bad days.”