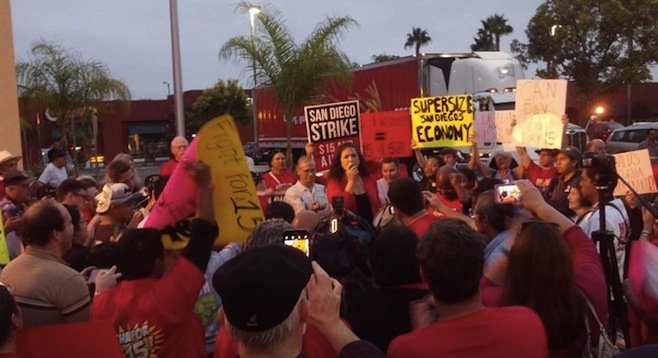 "Jerry Sanders and the chamber of commerce is at war with the working poor."

Fast-food workers and their supporters took to the streets again on Thursday, September 4, in the latest round of one-day strikes in the "Fight for 15" campaign for a $15 minimum hourly wage. Before the demonstration ended, several were behind bars.

"We have asked at the city council to 'raise up San Diego' [a slogan adopted by backers of a higher minimum wage] by a modest amount," councilwoman Marti Emerald told a crowd of about 150 that had gathered before dawn outside a McDonald's restaurant in City Heights. "But the business community here, led by Jerry Sanders and the chamber of commerce, is at war with the working poor."

Emerald and other speakers, including state assemblywoman Lorena Gonzalez, urged San Diegans not to sign a petition being circulated that would potentially jeopardize the minimum-wage increase (with incremental hikes to eventually reach $11.50 by 2017) and a provision for paid sick days passed by the city council and affirmed over a veto by mayor Kevin Faulconer. If petition-backers are successful, the ordinance will be put to a public vote.

After several speeches from the politicians and food-service workers participating in the strike, the group spilled into Fairmount Avenue and marched west on University Avenue toward a Burger King several blocks away.

"Are you ready for some action?" labor leader Richard Barrera asked the crowd upon arrival, receiving loud cheers of approval. "At this Burger King, we've got a courageous leader in our brother Elvis, who has stood up for himself and his coworkers. But just this morning, management kicked him out of his store because he had the courage to stand up."

No action ensued, however, as the store was locked up in anticipation of the gathering crowd, which then continued along University toward a Jack in the Box franchise, then onto the Interstate 15 freeway overpass.

Once there, 11 people, including nine strikers, were arrested for civil disobedience after locking arms to block traffic and chanting "I believe that we will win!"

"I’m tired of making $9 an hour. I can’t live off it. None of us can. I’m tired of being afraid I might be homeless because I can’t afford the rent here," said McDonald's worker Jay Ames, one of the arrested.

The small business owners these greedy thugs are trying to hold up are NOT "fat cats". It is impossible to double the cost of labor and not expect some sort of consequences. Those consequences will be layoffs, automation, and higher unemployment. If you believe otherwise, I have some prime oceanfront property in Florida for sale, cheap.

So you think you are getting a great deal when you embrace an employer who cost shifts the employee costs to the taxpayer. All you are doing is investing in current and future poverty. People who work hard and perform a service should make enough money to support themselves without taxpayer paid welfare and should have a decent level of benefits.

"I’m tired of making $9 an hour. I can’t live off it. None of us can. I’m tired of being afraid I might be homeless because I can’t afford the rent here"

So, either learn to do something useful that's worth more than $9 an hour, or move to Oklahoma where the cost of living is half of what it is here. Or starve.

Then why don't you make your own bed and park your own car and carry your own bags the next time you stay in a hotel. Why don't you try to do one of these worthless jobs and see how hard it is and find out first had that the skill level is much higher that you think it is. And while you are at it why don't we vote on your pay.

"Or starve" Let me guess; you're a Republican.

Rarely does one come across such a fount of human kindness.