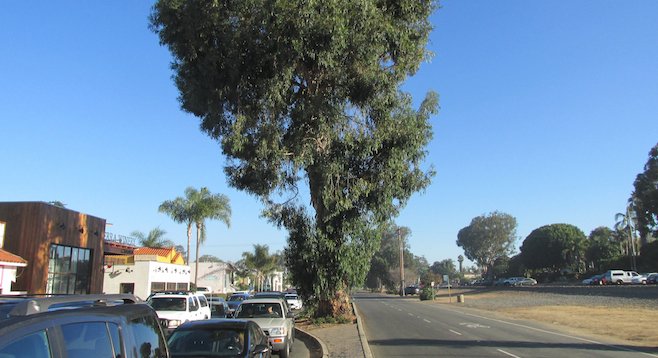 One of the last remaining tall, old, eucalyptus trees along Leucadia’s Coast Highway 101, at Leucadia Boulevard, is scheduled to come down soon.

Planted in the 1880s, images on old postcards are all that remain of the massive eucalyptus canopy that hovered over the pre-I-5 Highway 101, from Leucadia Boulevard to La Costa Avenue.

Over the years, the trees have been removed one by one. Some experts say they have reached their lifespan and pose a hazard of falling down. Others point out that eucalyptus can live up to 250 years and the city should trim and maintain them for optimal health.

A local blog, Encinitas Undercover, recently found out about the tree’s planned removal. The article called the tree an “irreplaceable, historic canopy.” City of Encinitas Public Works director Glenn Pruim disagrees. In a published report, he stated, “The city does not have a designation of ‘historic’ trees. Although this is a large, mature tree, it does not carry any designation of ‘historic.’”

Some residents are getting ticked off, not only over semantics of old vs. historic expressed by the city, but at the Leucadia Main Street 101 Association, the group that pushed through the streetscape improvement plan for Coast Highway, which calls for lane reductions, installation of five roundabouts, wider sidewalks and bike lanes, less curbside parking, and the removal of most of the old eucalyptus.

Last Sunday, Steven and Chantal came down from Oceanside, as they often do, to enjoy a breakfast at a curbside restaurant in front of the tree. “All the improvements are unnecessary spending,” said Steven. Chantal added, pointing out the tree’s majesty, “Just look at it. It isn’t going not fall down.”

Kim Beacort has lived in Leucadia for 35 years. She requested, “Leave the tree alone! Just trim it.”

Mary Fleener, a former political cartoonist for a local newspaper, and her friend Paul Therrio were the most vocal about the issue. Fleener said, “The city’s had it out for Leucadia ever since 2004, when we fought back against their redevelopment plan.” The plan would have allowed higher commercial density; that movement brought back the town’s 1970s slogan “Keep Leucadia Funky.”

The slogan was first used in the 1970s when Leucadians rallied against the issues of the day on Coast Highway, a proposed 7-Eleven, a drive-thru Jack in the Box, and the terminus of proposed Highway 680 — a four-lane road to link I-15 to I-5, from Rancho Bernardo, ending in Leucadia. (The 7-Eleven was built, but failed, and is now a produce market; the Jack in the Box was never built; and stopping Hwy. 680 became one of the rationales to push for cityhood in 1986.)

“There is pressure from developers to turn this stretch into something different,” added Fleener. When asked about the grassroots 101 Association’s streetscape plan, Fleener said, “The Leucadia 101 group is a shill for the city.”

Therrio then piped in — as he chuckled that I ruined a nice Sunday walk by bringing up the issue — to tell the city, “This is the last stretch of a classic Southern California coastal town. Just leave us alone.”

The city does have two other trees (not on Coast Highway) listed has “heritage trees,” recognizing their significance in Encinitas, which, translated, means “little Oaks.” Neither are eucalyptus. And no organization to date has sought to formally classify the old tree for that designation.

Pruim explained that the streetscape’s phase of construction that will include the tree removal has not yet been budgeted or scheduled.

Thirty-four trees, including most of the remaining eucalyptus, will be removed with the project. Supporters of the streetscape plan point to the planned replanting of 823 trees along the highway, mostly native oaks and pine trees.

Up until 1964, when I-5 opened, the once eucalyptus-lined byway guided thousands of cars traveling from San Diego or L.A. Franklin Roosevelt once traveled through in his presidential motorcade. He waved from the convertible at the local kids who climbed out on the eucalyptus tree limbs to get a glimpse of the president.