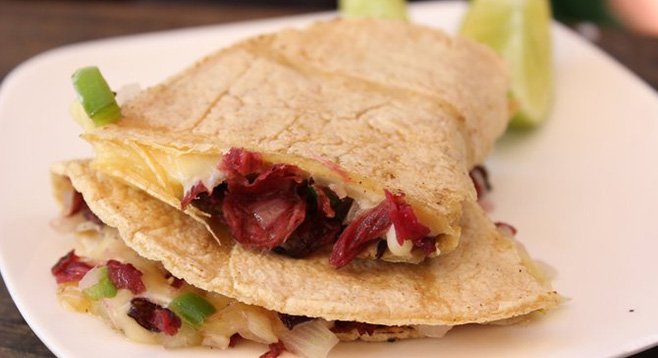 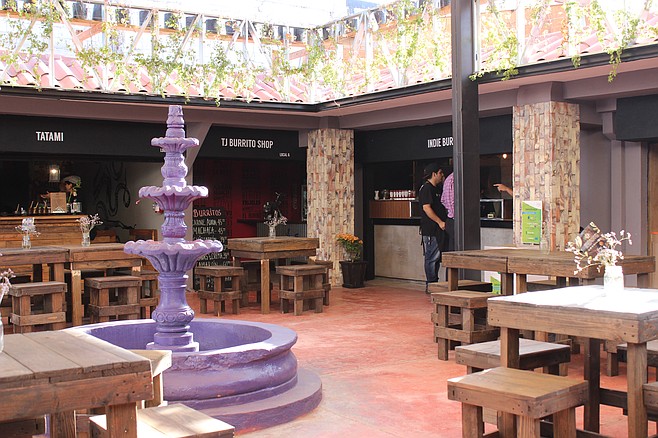 Gastrocourt Colectivo 9 opened at the end of September next to the iconic Mexicoach station.

Fixed gastrocourts and quasi-permanent food truck circles have been redefining the culinary streetscape of Tijuana neighborhoods such as Centro, Cacho, Gabilondo, and Distrito Gastronómico for the past couple of years.

Newest on the scene is Colectivo 9, a plaza of nine stalls at the end of an old curio arcade that has been given an air of clever modernity with geometric paintings, repurposed furniture, a Big League Chew-purple fountain, and a nonstop soundtrack of indie and electronic tunes.

The meatless appetite can find something at just about every locale here, which includes a Baja-tinged fusion of Japanese, Argentinian, and European cuisines at street-level prices.

But the most innovative vegetarian fare come from Chalita, an authentic Mexican kitchen named in tribute to the great aunt of Chef Irene Valenzuela. 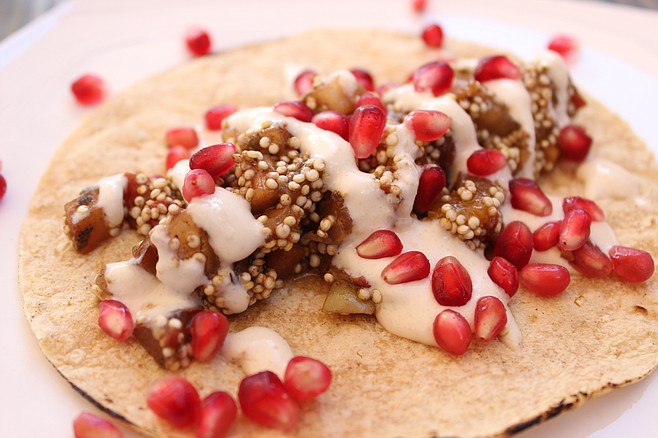 The veggie nogada taco is a seasonal treat from Puebla.

Valenzuela’s veggie nogada taco is a take on the autumn Puebla classic, chiles en nogada – a green, white, and red dish that celebrates Mexico’s independence with the three colors of the flag.

In Chalita’s deconstruction, diced panochera apple (similar to a crabapple) is roasted to pie-like sweetness and sprinkled with toasted quinoa, given a bitter pop by pomegranate seeds, and a savory finish with traditional cream sauce made from pounded English walnuts and spice.

A conservative helping of stringy, half-melted Oaxaca cheese absorbs all of these flavors, imparting mild heat followed by the tea-like (think yerba mate with lime) berry tang of hibiscus.

Chalita also offers seasonal dishes such as stuffed squash and nopales, but as of a recent visit, they were unavailable.

Forgivable for a joint that’s just over two weeks old, though I’m eager to see what else comes out of Chalita’s forward-thinking, old ways kitchen.