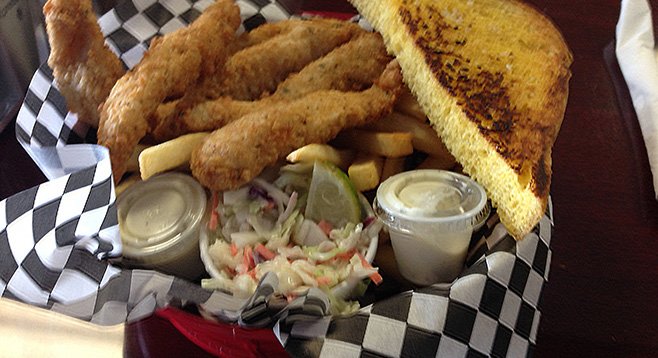 Tierrasanta presents a "new" fish and a shocking coleslaw experience.

San Diego's loaded when it comes to fish counters. It's even got more than its fair share of fish houses, fish shops and even a crab hut. But I'm pretty sure it's only got one Fish Bucket. 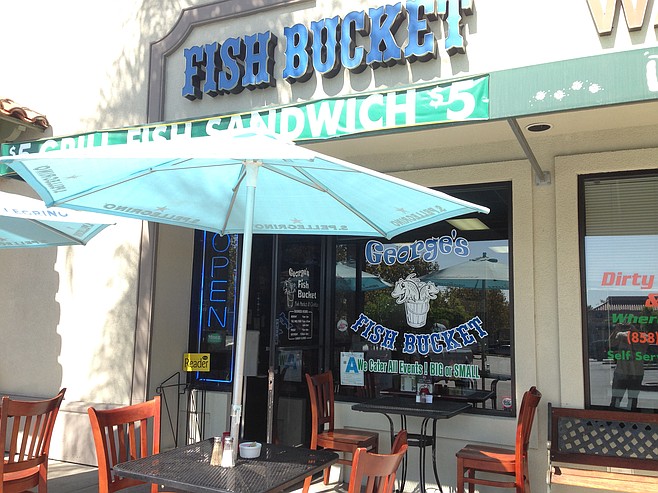 George's Fish Bucket brings casual seafood east of the 15, to a basic looking strip mall off the 52 in Tierrasanta. Decorated with replica fish trophies and corrugated metal walls, the inside has all the trappings of a seaside shack in a northeast fishing village — it's only missing a buoyed fishing net.

A choice of daily fish options are prepared charbroiled, grilled or breaded and fried, in a sandwich or in a basket. I had trouble choosing between seared ahi on sourdough or blackened fish tacos, so I asked for a recommendation from one of the owners. She suggested the fish 'n 'chips. That doesn't come with a choice of fish — it's made with swai.

In another era, I might have just said, "Swai what?" and gone with the tilapia tacos. But with a smart phone on hand I was able to Google this fish I'd never encountered. Turns out swai is the flesh of the iridescent shark, a river and delta species native to Southeast Asia. Technically it's not a shark, but closer to catfish, with a mild and flaky white meat that's apparently gaining popularity on this continent as river-farmed swai lacks the name recognition to justify high prices. 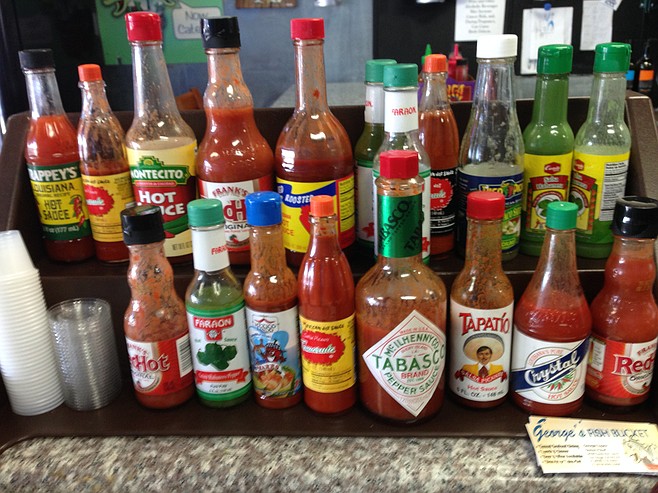 A parade of hot sauce to spice your fish.

I went with it, receiving a basket of fries, cole slaw, garlic bread and swai cut into breaded strips that I'd probably have to describe as fish sticks.

Pretty good fish sticks. The seasoned breading paired nicely with the better-than-bottled house-made tartar sauce, and the swai possessed a light oiliness, retaining more moisture than cod or halibut would. It tasted fairly mild, but the proprietors of the Fish Bucket have the foresight to provide a wide range of hot sauce to choose from.

The garlic bread was buttery and rich, and the fries lived up to expectations. Surprisingly, the cole slaw turned out to be the best of the sides. It was light to the point it was actually refreshing, the cabbage still crunchy — a far cry from the ice cream-scooped slaw that terrorized my childhood. I don't know how often I'll ever make such a recommendation, but don't eat at the Fish Bucket without trying the slaw.

Or the swai, for that matter. As far as budget-friendly fish goes, I'll take it over tilapia any day. I have to wonder how it would taste in a Baja fish taco.

Mushy, farmed freshwater fish is worth frying, and only just barely.

There's a reason the stuff is cheap....

On the other hand, it's a comfort to know swai probably isn't in the half of Southern California seafood that's mislabeled.

I wouldn't want to see it turn up at Ironside or Juniper & Ivy, but think it worked here as a fishstick, with crisp breading and lots of dipping sauce. Actually, I might be curious to see what Blais would come up with, swai-wise.

Part of the reason I catch my own fish....

Although, to be fair, I believe the report indicates that ~50% of commercial fish species are occasionally/frequently/infrequently mislabeled, not that ~50% of the total retail market. Mako shark sold as swordfish comes to mind as a common example, but I don't believe the data imply that 50% of labelled swordfish is actually mako, or whatever species fits the bill.