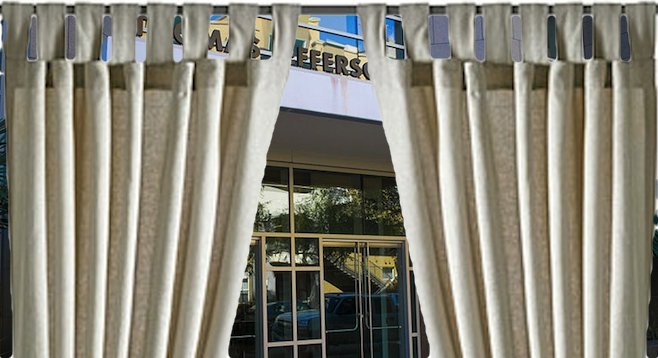 The school moved into a fancy new, eight-story building in early 2011. Now it has $133 million in tax-exempt bonds headed for default, says City Journal, and that was "predictable, even inevitable," says the publication. Jefferson's bonds have a junk rating. "From 2007 to 2013, Thomas Jefferson raised its acceptance rate from 45 percent to 81 percent — essentially open admissions — but enrollment still declined," says City Journal.

As the Reader has been reporting, Thomas Jefferson consistently has a very low bar-exam pass rate among California's 21 accredited law schools. "The actual placement rate for Thomas Jefferson graduates in full-time legal positions within nine months of graduation is [close] to 25 percent," says City Journal.

Says City Journal, "When the bondholders' forbearance agreement with Thomas Jefferson ends in October, the law school may have to suspend operations if it cannot resume debt repayments...the diminishing viability of Thomas Jefferson's business model makes a happy outcome unlikely."

Since nobody associated with this school wanted it to fail, there must have been some flaws that brought it to this point. Was the main reason for the low bar exam pass rate that the students just hadn't been properly prepared? And if so, did that reflect too much of the money collected going into the pockets of administrators and executives, and too little to hiring competent professors? Going deeply in debt to get a fancy new building didn't help with the finances, and it might seem that it didn't help with recruiting either. Or was it that the school was a bottom feeder, accepting students who were poor prospects for law study or success in the legal profession? Poor prospects or not, TJ wasn't bashful about charging tuition that was higher than the better ranked schools in the region.

In LA there is a newer law school that occupies the former Bullocks-Wilshire building on the street of the same name. It was a real piece of late-1930's Art Deco magnificence, and the school makes a big deal of the digs. But last I saw, the school didn't rank very highly at all, and in the snobbish world of law schools, smart students head to the best ranked and highest esteem school that will take them. With a surfeit of law schools and law school grads, survival of the fittest may bring supply closer to demand in the next few years. If so, TJ is just surplus. But the recent grads of the program may be very unhappy when they have to explain that their alma mater is "the law school that went out of business."

Visduh: I think we have to face facts and conclude that it is likely Jefferson will fail. It needs income, so it accepts almost all who apply. Is it any wonder that it has been dead last in the state bar exam pass-rate in the last couple of years?

The new building has been a financial disaster. Nationwide, there are too many lawyers and too many law students. Jefferson enrollment has been going down.

One has to wonder how it got $133 million of debt in the first place. Did Wall Street do its homework?

Wall Street failed us all in the years leading up to the financial melt-down of 2007-9. WS doesn't know what homework means.

Visduh: Agreed: Wall Street nearly sent the entire world financial system plunging to its death during the financial meltdown. Reason: it had not done its homework on the danger of derivatives, and did not see the mortgage calamity coming. But we bailed out Wall Street, didn't send any of its top executives to prison and watered down financial reforms. Best, Don Bauder

Southwestern Law School was founded in 1911. Its original campus was on Spring Street in Los Angeles. The law school has graduated more minorities and women than any other law school. It is fully - accredited by the American Bar Association and the American Association of Law Schools.

"Getting a job" and practicing law are two different things. Yes, go to the T14 law schools if you can get in and afford the tuition. Southwestern has many graduates who are trial lawyers and judges. Not everyone works for corporate America.

The law is a stern mistress. Do not go to law school if money is your goal.

Don, A related subject: Have you ever researched for-profit medical schools outside the US? One in particular, Ross University Medical, on the island of Dominica, is of interest. DeVry owns the school. I don't think Ross is accredited by the US, but DeVry manages to buy residency slots for its students in California. Lately I've noticed that Kaiser Permanente has a number of young family-practice docs with a Ross medical degree in San Diego facilities. Your thoughts?

HonestGovernment: I have no comment on this because I didn't even know about it. I knew about questionable medical schools, but had never heard of this one. This is very interesting.

Dominica is an offshore tax/secrecy haven in the West Indies. Is that a factor in the location of the medical school? Dunno. The parent, DeVry, is a for-profit school. Don Bauder

Daniel Beeman: CivicSD, formerly CCDC, denies that it was involved in any subsidy for the Thomas Jefferson School of Law building, which threatens to pull the institution under. Best, Don Bauder

Jake Walton: Thomas Jefferson School of Law says it is the first for-profit law school to earn American Bar Association accreditation. It has an utterly dismal record in percentage of grads passing the bar and getting jobs in the legal field. It can be compared with San Diego's Bridgepoint Education, the for-profit so-called university that has been called an "absolute scam" by a U.S. senator, and is under investigation by several states and the federal government. Best, Don Bauder

IT'S THIRD HIGHEST-RANKED LAW SCHOOL BUILDING. Irony of ironies. The publication Singapore Law Watch reports that Best Choice Schools, an online resource based in the U.S., ranks Jefferson's law building (which will belong to bondholders) as the third best law building in the world. Best, Don Bauder