Michael McManus of Philadelphia was sentenced Tuesday (October 7) to 16 years in prison for running an up-front loan scam that fleeced $26 million from more than 1000 hopeful entrepreneurs who gave him up-front money to get a loan. But McManus's operation, Remington Financial Group, kept the up-front loan payments without delivering on the loans.

That's the essence of the up-front loan scam: people who can't get loans from conventional sources pay a fee to the con artist who promises a loan, but never delivers, and keeps the up-front payment.

One of McManus's victims was former San Diego councilmember Ed Struiksma, who was once an acting mayor in the mid-1980s. Struiksma earlier told Bloomberg News that in 2006 he paid Remington $25,000 in fees, but failed to receive $8 million to $10 million he needed to fund an 1100-acre master-planned community in Central California.

Struiksma said Remington gave him a partial refund — $300 a month for about a year. After Remington got his money, the company "started coming up with requests for studies costing a couple hundred thousand dollars," Struiksma told Bloomberg. But with no loan in sight, the project tanked.

Joel Nathanson of San Diego was "one of Remington's most proficient employees," said the Federal Bureau of Investigation in Philadelphia. Nathanson was sentenced to 12 months and one day in prison.

Sorry, I don't feel much for the ex-pol. who was trying gain great wealth quickly. This seems to be what all the politicians are looking for rather than working for constituents, taxpayers and citizens. Wonder how much he gained while on council for himself over his constituents and the SD citizens? When I ran for SD City Council District 3 (SDSU to DT SD) 1999 the Citys' budget was $1 Billion ,and unfunded infrastructure needs was $400k, now it is $2 Billion budget, and a $2 Billion unfunded infrastructure needs. What have they done with all of our tax money? Why do they keep adding projects we can't afford and infrastructure we can't afford to maintain? 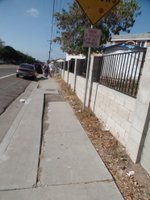 Here is a ever being patched sidewalk that has only one side of sidewalk on this very busy street Home Ave. near 47th St. Just further down NO sidewalk! What about wheelchair bound citizens/constituents? 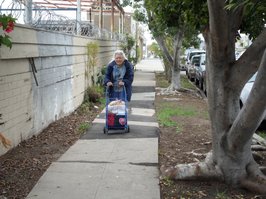 Here a senior who lives in senior/handicapped housing, walks by a city parcel where the sidewalk has been bulging for over a decade, as I remember walking this block when I ran for City Council 1999! The St. 33rd north of El Cajon Blvd, is also leaking water, and bulging at the sewer line. 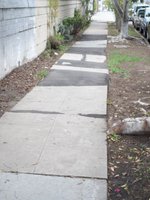 FreedomPlease: You are absolutely right that the San Diego infrastructure is a disgrace. Thanks for showing some pictures. Despite the massive infrastructure deficit, the downtown overlords still want to subsidize a Chargers stadium and a convention center expansion. Ridiculous. Best, Don Bauder