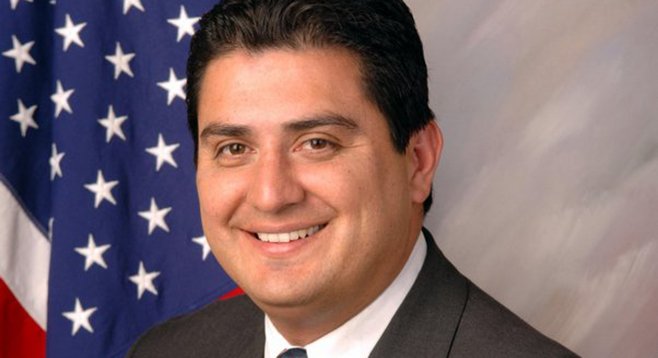 Democrat Fabian Nuñez — the San Diego born-and-bred ex-speaker of the California Assembly who obtained an abbreviated prison term for his son by being friends with GOP governor Arnold Schwarzenegger — has come up with some more campaign cash for DUI-saddled state senator Ben Hueso. According to a disclosure filing, a campaign committee known as “Fabian Nuñez for State Treasurer 2018” gave Hueso’s reelection bid $3000 on September 29. Nuñez can more than afford it. As of June 30, his campaign fund was sitting on $4,068,006, down from $4,690,047 in 2012, when Nuñez said he was planning to run for treasurer in 2014.

California law permits such funds to operate indefinitely, provided candidates profess intent to run for state office in the future, whether or not they ever do. Last year Nuñez gave Hueso, then a member of the Assembly, $4100. The former speaker also gave $5000 to an ultimately failed Pasadena school-board bid by Hueso’s brother Ruben. Hueso is currently awaiting sentencing on a drunk-driving charge incurred after he was busted by the California Highway Patrol on his way home from partying on the state capitol’s balcony this summer. Nunez’s son Esteban got his 16-year manslaughter sentence for a student’s death in a 2008 San Diego knife fight cut to seven years by Schwarzenegger only hours before he left office in December 2011.

The older Nuñez is now a partner in Mercury Public Affairs, a so-called public strategy firm hired by special interests to influence the legislature. According to the firm’s website, Nuñez’s “influence as a national political figure is of tremendous value to Mercury clients as he is able to tap into his understanding of political, cultural, commercial and government dynamics to help advise and guide clients on the best strategies to employ and the best tactics to use to ensure the best outcome.”

That is more than a little sickening.

Is Nunez trying to get back into Lorena's Latino Caucus?

Follow the money and you will see who controls our political puppets.